This has GOT to STOP! 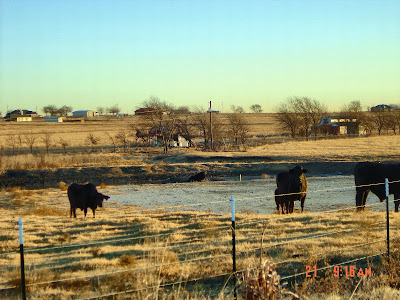 This sludge pit is WAY past the 120 day limit for clean-up mandated by state law and I’m sure the Texas Railroad Commission neither knows nor cares where this pit is located. I took pictures of the cows watering from this pit about a year ago, but I had a short period of despair when I deleted the pictures.

Who wants a nice, juicy Angus burger raised on toxic drilling waste? Hamburger in Paradise, right? There’s no telling where that beef is headed either–Dallas, Fort Worth, Austin, Houston, New York, who knows?

Texas needs to follow New Mexico’s example and get some new pit rules.

Episode 4: Range Wars Rage On
The Blancetts and Velasquez share something else in common – their cattle are becoming sick and they are dying. After some reconnaissance they found strange spills near the drilling platforms that peppered their grazing lands. They quickly concluded that their cattle must be drinking the chemical waste spilled by the oil and gas companies.

Citizens’ groups, ranchers, landowners urge state to protect water, public health and taxpayers with strong pit rule
Chris Velasquez, a rancher from Blanco, has struggled with open pits that threaten livestock, grazing operations and wildlife. In 2001, Velasquez had twenty cattle walk into an unfenced pit. “I’ve seen a lot of cattle die or abort from drinking out of these pits, and deer, too.” Velasquez said. “Not only am I losing cattle, but the operators bury these pits once they’re done. The contaminants sterilize the soil and move around with the rains. I definitely worry about the water and the wildlife.”