Big Oil tells us, as they plead to drill in the Arctic National Wildlife Reserve, as Senator John McCain calls for drilling off the shores of the Lower 48, it can’t happen again. 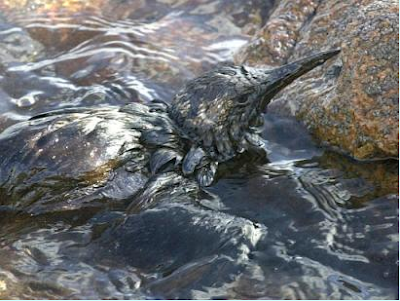 The only way to protect ourselves from the Drill Here, Drill Now, Drill and Burn, Domestic Drilling Armageddon is:

Thanks to the Supreme Court, we no longer have option #3. The Supreme Court gave Big Oil permission to pollute with the ruling that Exxon should not have to pay punitive damages for the Valdez spill.

[Thursday, June 26, 2008] Twenty years after Exxon Valdez slimed over one thousand miles of Alaskan beaches, the company has yet to pay the $5 billion in punitive damages awarded by the jury. And now they won’t have to. The Supreme Court today cut Exxon’s liability by 90% to half a billion. It’s so cheap, it’s like a permit to spill.

Exxon knew this would happen. Right after the spill, I was brought to Alaska by the Natives whose Prince William Sound islands, livelihoods, and their food source was contaminated by Exxon crude. My assignment:to investigate oil company frauds that led to the disaster. There were plenty.

Originally all the Natives wanted was enough for some boats and to ride out the 10+ years of “trying to survive in a polluted ecological death zone.

Exxon’s US production chief channeled Barbara Bush and said, “Admit it: the oil spill’s the best thing to happen” to the Natives.

His company offered the Natives pennies on the dollar. The oil men added a cruel threat: take it or leave it and wait twenty years to get even the pennies. Exxon is immortal – but Natives die.

A third of the men Greg Palast worked with are now dead and two decades late, their families will only collect one tenth of the award.

In today’s ruling, Supreme Court Justice David Souter wrote that Exxon’s recklessness was ”profitless” – so the company shouldn’t have to pay punitive damages. Profitless, Mr. Souter? Exxon and its oil shipping partners saved billions – BILLIONS – by operating for sixteen years without the oil spill safety equipment they promised, in writing, under oath and by contract.

There is no way that I can write a summary that would even come close to capturing the righteous anger in Palast’s telling. I urge you—no, I BEG you—to to read about the unbridled greed and deliberate lawlessness that was never exposed in this story.