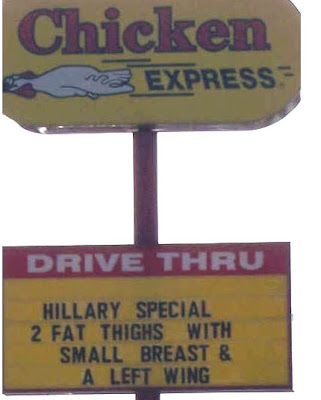 Don’t worry that children never listen to you; worry that they are always watching you. ~Robert Fulghum

Sometime during April, Wise County watched as the Bridgeport Chicken Express displayed the following on their marquee:

Let’s forget about the political message—we don’t care to do business with Democrats—and look at the many, negative messages this sign sends our youth.

As many as 86 percent of American children are bullied at school. Later in life, children who were bullied suffer from poor self image and emotional problems, while children who bully others are at a greater risk of breaking the law. On-campus homicide and suicide have increased 500 percent in the past four decades.

Men are judged by their accomplishments; women by their thigh and breast size.

If a girl is born with the genetic predisposition to have full thighs or small breasts, there is little she can do about that other than dieting or surgery.

One in five women has an eating disorder, and up to 20% of those affected will die as a result. Ninety-five percent of those who have eating disorders are between the ages of 12 and 25. Young women are literally dying to have thin thighs!

More than 360,000 women and teenagers underwent surgery to have their breasts enlarged with silicone or saline implants in 2005. Any surgery involves risks; and since breasts implants have a shelf-life, all of those women will face at least one more surgery. The risks from implants increase over time and include ruptures, silicone migration, bacteria or mold that can grow in saline implants and escape into the body, cognitive problems, pain, hardening of implants, loss of sensation, and financial burdens from repeated surgeries.

The Chicken Express Message was clearly sexist, immature and irresponsible. By calling it sexist, some people may call me a feminist; and that’s alright as long as you don’t call me a doormat.

I myself have never been able to find out precisely what feminism is: I only know that people call me a feminist whenever I express sentiments that differentiate me from a doormat. – Rebecca West

I hope that Wise County businesses will show more responsibility and give our children a better example to watch.

[o]ur children are watching us
They put their trust in us
They’re gonna be like us
So let’s learn from our history
And do it differently… ~ The Dixie Chicks, I Hope

The Wise County Messenger Letters to the Editor