For more than four years, I watched this class II commercial injection well almost daily. On October 5, 2007, I stopped to take a closer look and snap some photographs. What I saw up close was alarming. There was obvious spillage around the hoses and valves, the facility was poorly maintained and the fumes were overpowering. (See pictures) This class II, commercial injection well was inspected by the Texas Railroad Commission on September 27, 2007, and found to be safe and “clean” only eight days before I took the pictures.

The Star-Telegram reported this week that an audit revealed 46% of the wells in Texas have not been inspected in the past five years!

About 30 percent of the gas wells operating in Tarrant County have not been inspected within the past five years. The inspections are the responsibility of the Texas Railroad Commission, which enforces safety and environmental rules for gas drilling.

I wonder when this well site was last inspected. I wonder how many sites like this are there all across Texas. How many…

Click to enlarge (Don’t miss close inspection of the pipes. Could that NORM I see?) 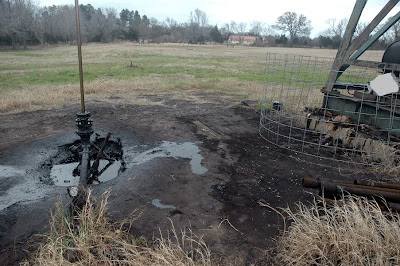 These toxins leach into the soil. When it rains, runoff carries these toxins into our drinking water. Toxic water is consumed by the animals we eat and absorbed by the plants we eat. It’s in everything and it runs downhill so that this water becomes your water.

Keep watching for more information about this wellsite.

The Railroad Commission oversees the oil and gas industry in Texas. It is run by three commissioners, who are elected statewide to six-year terms. Commissioners earn between $92,000 and $137,000 a year.

The three current commissioners each get a substantial amount of their political contributions from the oil and gas industry, according to an analysis of contributions for 2006 by the Web-based watchdog group followthemoney.org.

Elizabeth Ames Jones, who was appointed to the commission by Gov. Rick Perry in 2005, also got about a third of her contributions from the oil and gas sector — $695,000 out of $2.1 million.

However, I’m in agreement with Pegasus News:

One aspect of the S-T story that I believe was underplayed was the amount of money that members of the Texas Railroad Commission have taken from the industry they are supposed to regulate. How is it that commissioners can take hundreds of thousands of dollars from the industries they are supposed to regulate and it is not front page news? Of course, our own Mayor is swimming in money earned from the oil and gas industry, but this is sidebar material, too? So the two entities that have the most sway over gas drilling decisions in Fort Worth are free to take money from gas drillers and still regulate their activities?

Was conflict of interest the reason Michael Williams refused to comment for a year while Texans burned alive because of faulty gas couplings?

“Our finding: Tens of thousands of north Texas lives may be at risk.”

“Over the past year, we have been told repeatedly that the Commission Chairman Michael Williams would not comment.”

Further reporting by Shipp revealed Railroad Commission too Chummy With Industry it Regulates.

A check at FollowtheMoney shows the protection money Atmos paid to Michael Williams and Victor Carillo.

Dale Henry has called for reform:

AUSTIN–Following revelations by the Fort Worth Star-Telegram that Railroad Commissioner Michael L. Williams accepted free Super Bowl tickets from a lobbyist for CenterPoint Energy in 2004, the Dale Henry Campaign released the following statement:

Citizens have called for an investigation into RRC Malpractice!

Will Sen. Estes Investigate the RRC for Malpractice?

At this point, we can no longer hope that any current office holders with oversight will act in a responsible manner and protect the citizens who hired them. The only reasonable course is to elect people who will put the public’s interest first.

Dale Henry is in a runoff with Mark Who? Texans are advised to PAY ATTENTION and choose wisely for this important office.