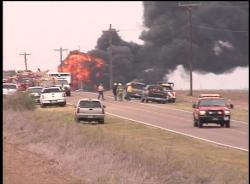 Hey, Cowtown! It’s a good thing you don’t have any gas pipelines in your neighborhoods.

MCCOOK, Texas – Multiple agencies were called in for mutual aid to assist in a natural gas pipeline explosion operated by HESCO gas.

The “Authorities” don’t know what caused the explosion but said that pipelines just do that sometimes all across the United States because of wear and tear.

In China, 191 people died from poisonous fumes in a recent gas well explosion.

…the well blast nearly wiped out an entire village, caused other widespread damage and had yet to be fully contained.

Hey Denton! Duck and cover people! We’re all collateral damage in the quest for oil and gas profits.

City leaders who are blinded by oil and gas money are not making good decisions for the citizens they represent! Gas wells and pipelines should not be allowed anywhere near neighborhoods. People are nothing but collateral damage in the quest for oil and gas profits. The Railroad Commission is charged with protecting the public and they should revise their rules to keep citizens safe.

Oh wait! The RRC is also blinded by oil and gas profits. Who will protect Texans?