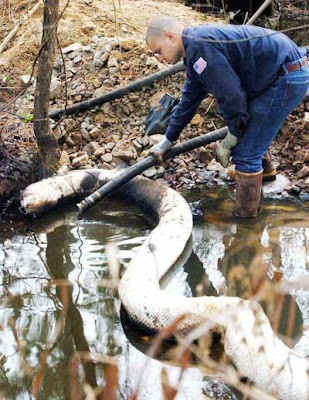 Basic Energy Services Brian Grayson skims oil off the top of the water in Oil Springs Creek Friday afternoon after approximately 170 barrels of oil spilled from a nearby tank that had apparently been shot.

Apparently someone was just out rabbit hunting, this time.

“A small game animal — a rabbit — and a .45 caliber shell casing were found at the scene,” Kerss said. “It’s quite possible whoever fired the shot was aiming at the animal and not the tank, but the bullet passed through.”

He said the hole had gone undetected for a few days before it was reported, and the amount of time that passed is what resulted in the amount of seepage.

We have lots of unguarded drilling sites and well sites in Texas with tanks of oil and toxic water and natural gas. (Stuff that we don’t really want leaking out on the ground and in the water for several days before anyone notices.)

We have lots of guns in Texas.

Seems like a fubar in the making… Is anybody out there planning for the inevitable?