Another gas well exploded in Louisiana on Sunday and the 15 evacuated families still can’t go home. 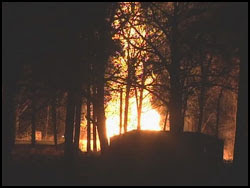 There was a loud bang then flames shot up 300 – 400 feet. Firefighters, Sheriffs deputies and hazardous materials teams were called to the scene.

It is believed that a natural gas pocket was hit during drilling causing the drilling rig to explode into flames.

On Christmas Eve, residents were told that it would be 2-3 days before they could return home while the emergency crews bring things under control.

“We just heard a loud bang in the house,” said Melea Gauntt, who along with her family, had to leave her home. “We had a friend coming over and he said there was a fire right down the road. So, I ran outside and looked and saw that the derrick was on fire.”

This is the 3rd gas well explosion and fire in that area in 3 months.