ANSWER: Both inspections are conducted by the Texas Railroad Commission (RRC).

NOTE: If you think this is of no concern to you because you don’t live in Wise County, remember, water, even groundwater, flows downhill.

Update on this injection well HERE

Memos from the early 1980s warned gas companies nationwide that the couplings would not meet Federal regulations. The same couplings were used in Minnesota where they took swift action to replace all their faulty couplings. Shipp discovered RRC memos that were covered up and negligence and malpractice in his investigation.

We need Shipp to conduct an investigation into the RRC practices regarding injection well inspections. Injection wells can also cause fatalities. Although, because they don’t blow up, death by injection well may not be quite as spectacular. Oh wait! They do blow up!

I took you on an Up Close and Personal picture tour of a Barnett Shale injection well a few miles from my house. The pictures were circulated and Brandon Evans, Wise County Messenger, wrote an excellent article: Commercial disposal well raises concerns .

“It is out of compliance because it is unattended and it is polluting the ground,” said Tracy Smith of Greenwood. Greenwood is located about three miles south of the county line.

After this article I waited, watched and hoped for improvements. Finally, I made another visit to the site but the only improvement was yellow paint on the pipe.

I decided to do some digging and turned up some disturbing things.

Keep in mind, while you read this, that according to RRC records, 353,677 barrels (14,854,434 gallons) of toxic soup was injected into the ground via this well during the first 11 months of this year. Also keep in mind that we have no way to prove that volume because reporting is self regulated.

The following information is public record:

This well belongs to Clay Wilson of Carlsbad, NM.

Three different NM corporations he started have had their status revoked.

I placed several calls to the RRC and got transferred around and disconnected but, if I’m anything I’m tenacious. I finally connected with a very nice, helpful woman who gave me some history of the well.

No one could tell me when the well was last inspected until, after more transferring around and phone calls, I talked to Charles Morris in the Wichita Falls office.

Morris reluctantly told me that the well was shut in in September 2006 due to bradenhead pressure which basically means it failed and the toxic soup ended up somewhere other than where it was supposed to go. Two nearby wells were plugged to reduce the pressure and the well resumed operation.

I asked Morris why there was no locked gate or security and he said that’s not required because this facility has a card swipe the drivers use to dump the waste. That prevents unauthorized dumping of hazardous waste and, since injection wells aren’t dangerous, Oh wait! They blow up!

I asked him about the required catch basis to prevent soil contamination and he said the well is in compliance (see pictures of plastic buckets with evidence of spilled toxins on the ground).

The only catch basin present at the Calhoun No. 1 well where the tanker truck connects with the disposal storage tanks is a pair of plastic buckets. Traces of spilled fluid are present all around the area.

“The biggest threat is that it is going to contaminate the surface,” Smith said. “The run-off goes into streams and pollutes waterways. It can endanger animals and people.”

A narrow, rock-bed creek is located approximately 100 yards downhill from the disposal well. Some of the same dried spillage located around the disposal facility was also observed on rocks in the creek bed. Vegetation was dead at those locations.

NOTE: That narrow, rock-bed creek flows into Denton Creek which is only about 3 miles away.

Finally I learned that the well was last inspected on September 27, 2007, just a few days before I took the first pictures and it was found, according to Morris, to be safe and “clean.” That’s when I lost it. If this site is safe and “clean,” what must the ones that don’t pass inspection look like?

These pictures were taken on November 25, 2007. You’ll want to click to enlarge. 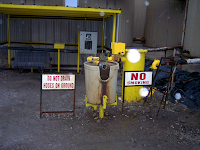 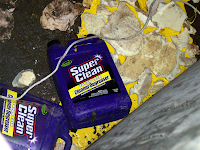 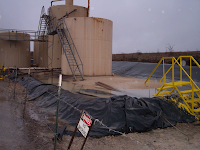 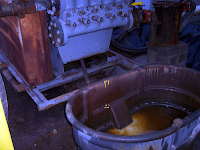 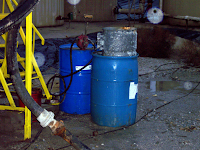 Read just a few of the chemical labels 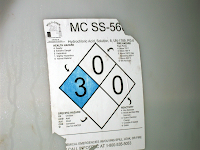 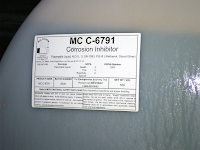 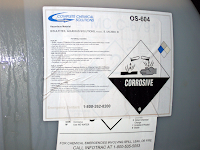 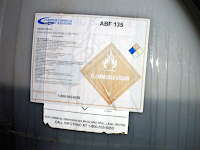 This is not the only well owned and operated by Wilson. There is another one in the area.

There’s a chain of command at the RRC. First you call the district office in Wichita Falls, 940-723-2153, Scott Henry is the Assistant Manager. I spoke with Charles Morris.

The next step is the Austin office, 512-463-6760, Doug Johnson, Manager of Underground Injection Control.

As we’ve already witnessed, the most effective step is bshipp@wfaa.com OR investigates@wfaa.com and Brandon Evans bevans@wcmessenger.com