48% of all DFW pollution from this one plant. That means the gas drillers aren’t to blame. Sorry to bust your bubble Sharon but please point the finger at someone else.

Why thank you Anon 1:40 but do you think you could find a study from this decade? The samples for that study were taken in 1994 and 1995. How lame. They weren’t drilling in the Barnett Shale during that time. But, shame on that plant for emitting 48% of the pollution during that time period.

A more recent study conducted by Department of Chemistry, University of California, during 2002 and 2004 found the following:

There is extensive hydrocarbon pollution in the skies above North Texas, home to the Barnett Shale oil and gas boom. Hydrocarbons are at a level equivalent to what was once considered to be the entire country’s annual hydrocarbon emissions level.

Pretty dramatic, wouldn’t you say? So, Anon 1:40, you can’t deny the FACT that Barnett Shale drilling comes with a high price for the residents of North Texas. Well, actually, you can try to deny it but facts are facts.

Maybe this will help. I was recently informed by a someone at the Texas Railroad Commission that 240 Barnett Shale wells are drilled each month. Let’s just pretend that number is correct for the following illustration:

If you look on Scorecard you can determine, based on where you live, how much greater your risk of getting cancer compared to the Clean Air Act goal.

Don’t forget to check the list of typical contaminants from drilling for several more seriously dangerous chemicals emitted during the drilling process and throughout the life of the well.

So, I hate to bust your bubble Anon 1:40 but here’s a finger and it’s pointing at YOU! 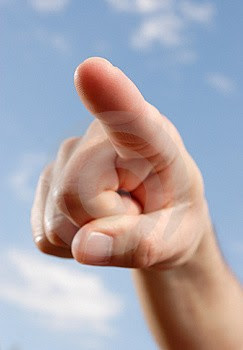 POINTING FINGER
© Looby | Dreamstime.com
Update: Anon 1:40 is a Devon Energy employee. Figures… They could use some smarter employees.