Elizabeth Ames, protector of the oil and gas industry, is on a railroad track leading nowhere and she is doing everything in her power to drag Texans along with her. In her WaPo screech called Energy Security 101 she “reasons” that we should poke holes in the earth 24/7 sparing no patch of ground no matter how sacred.

It stands to reason that a rational and responsible federal government would craft energy policies that nurture the growth and development of this exciting potential energy supply. Yet Congress is slamming the door on development of large domestic reserves of hydrocarbons.

Next she holds up the shining example of Texas and the Barnett Shale nightmare.

For America to achieve energy stability and security, federal policymakers must cast off ’70s thinking and learn from the recent experiences of energy-producing states such as Texas. A new era of oil and gas exploration has begun. Technologies such as horizontal drilling require only a fraction of the “footprint” once used for well sites. Using best practices, drilling and production today are much cleaner and far more efficient than in the past.

I can’t even call that bullshit. That’s just an outright lie! If using HUNDREDS OF BILLIONS of gallons of fresh water, polluting it beyond recovery then permanently (except when it accidentally finds its way to the surface polluting our groundwater on its way) removing it from our water cycle is what she considers a fraction of the footprint, I hope to God she never unleashes the remaining fraction on us.

The Railroad Commission is supposed to answer to the people but their real master is oil and gas.

At the Barnett Shale symposium last year, I learned from a Devon representative that each Barnett Shale well is only fraced one time using about 5 million gallons of fresh water. I know 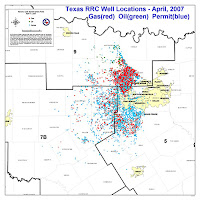 that’s not true because I caught them lying. On my way to work every day, I pass a well that in less than a year was fraced 3 times. Today I tried to get the frac records from the RRC but they weren’t available. In a year, they haven’t found time to file the reports that no one checks for accuracy. Where is the RRC oversight? Can’t the RRC, at least, insist they file the pretend reports?

The dots on this map (click to enlarge) represent oil or gas wells or permits for same. Look at each dot and think about all the water polluted then removed from our water cycle. That looks like a mighty big foot print to me.

When Chesapeake dozes the Trinity Trees what kind of footprint will that make?

There was very recently another spill in Panola County near the town of DeBarry. The tanker truck spilled drilling waste all over the road. The driver was headed to make a dump into a class II injection well. He admitted that he normally takes the waste to that class II well. However, when tested, it turned out he was hauling class I waste. When reported to the regulator of class I waste, Texas Commission on Environmental Quality (TCEQ), they found that it was OK to dump the class I waste in the class II injection well therefore, no fines were assessed. I thought Tracy’s question, below was a good one.

… one should question why we have a difference in classes of wells. Also, in a Class I well Facility, they are equipped to do the proper testing to determine the waste type as to not mix volatile hazardous waste that could cause upset events or explosions.I think the next obvious steps are to contact the EPA and an environmental attorney and of course media. Construction of a Class II well does not meet the same requirements of a Class I Injection well and for the TCEQ to determine it safe and protected for future use would be impossible to access. The safest way to assure public safety would be to shut this well down completely.

In other words, there is no regulation. Period. We are on our own with no one on our side.

Elizabeth ends her screed by throwing out the by now all too familiar fear card:

Our country’s energy dependency makes us dangerously vulnerable in economic terms and compromises our national security. Public policies that support rather than impede efforts to increase responsible domestic production are what America needs to retake control of its energy lifeblood from rogue dictators and banana republics.

Before Elizabeth was appointed to the RRC by Rick Perry, she was an interior designer. Maybe she should go back to that. A better way to make America invincible in regards to energy is to invest in researching clean, renewable sources of energy. Then we can save our oil and gas for the many petroleum products such as the endless plastic water bottles and all those billions of plastic bags we use every year that are made from petroleum.

We should work toward ending this insane system of ruining our environment and precious natural resources but until we are at last free of beating the dead horse that is our hydrocarbon addiction, we need someone in the RRC who will watch out for the best interest of Texans. That’s why we need Dale Henry for RRC.

The Texas Railroad Commission is broken.
Dale Henry can repair it!