To my fellow Texans: Ive had an epiphany.

That’s all it’s about. One thing and one thing only.

It’s not about conservatives or liberals or Republicans or Democrats. It’s only about one thing.

It’s not about family values or equal rights for everyone or the sanctity of marriage or the dead babies you abort or immigration or patriotism or WMDs or terrorism. It’s only about one thing.

It’s not even about religion. It’s only about one thing.

Before we can go any further you need to understand that all it’s about, all it’s ever been about is

I used to think it was about conservatives versus liberals, Republicans versus Democrats but that’s just politics and it’s not about politics. Politics is a tool they use for one thing and only one thing. MONEY

I used to think it was about equal rights and war and all that other stuff but they don’t care about two queers who love each other or the sanctity of marriage or the dead babies. Those are just ways to control. Control is a tool they use for one thing and only one thing. MONEY

I used to think it was about religion but religion is just a way to control us and to pit us against each other so they can get one thing. MONEY

the income of the richest 0.1% of Americans rose 296 percent.

The opening paragraph of his new book:

“I was born in 1953. Like the rest of my generation, I took the America I grew up in for granted – in fact, like many in my generation I railed against the very real injustices of our society, marched against the bombing of Cambodia, went door to door for liberal candidates. It’s only in retrospect that the political and economic environment of my youth stands revealed as a paradise lost, an exceptional episode in our nation’s history.”

In his first blog post he includes a chart to demonstrate economic inequality in the United States. 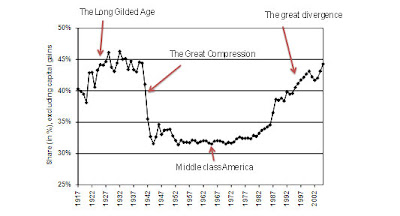 Krugman is right to lament about the America we once knew. This is not America. The American dream of a little boy who read by an oil lamp in a log cabin and grew up to be president is no more, unless that little boy has millions to run his campaign.

Just look at the TX Senate race. Mikal Watts, a multi millionaire has donated $7.5 Million to his campaign.

He used his influence along with others in the millionaire lawyers club to withhold support from our 2006 statewide candidates. Instead he gave hundreds of thousands to Republicans.

It’s been said that he uses his millions to influence the judicial system.

Rick Noriega doesn’t have millions to donate to himself. All he has is the support people like us give him. He needs MONEY because that’s the way they play this game and we have to beat them at their own game until we are strong enough in numbers to change the rules of the game. MONEY isn’t the only thing he needs though. He needs our votes in this poll. He needs us to convince our family members and our friends that we can still make a difference–get them out to vote. And we need him to make a difference for us and our families before our futures are caste.
The end of September is when the campaigns do their financial reporting. They will try to make it about MONEY. Don’t give them that. Give to Rick’s campaign today.

They only care about making more of and keeping all of one thing. MONEY