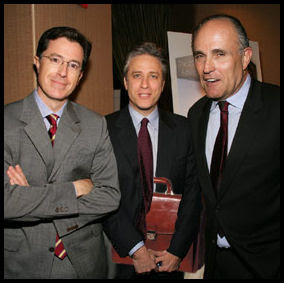 “We’re standing there for a photo op,” stated presidential hopeful Jon Stewart, “and then Rudy suddenly hands me this bag, and says “Here, hold this while I straighten my tie.”. What am I supposed to do? Here’s the former mayor of New York City asking for a little favor… I guess he just forgot about the bag after a few pictures and some more talking. That sucker was heavy… and I got tired of holding it after a few minutes. I remember thinking, what in the heck does he have in here, a dictionary… or maybe his entire plans for capturing the presidency…? Nah… Stephen was standing there so I just gave it to him and followed Rudy over to the wet bar for another gin and tonic.”

Vice presidential hopeful Stephen Colbert then continued the account: “I’m standing here holding the man of… no… the God of 9/11’s briefcase, and I’m just in awe. Then I looked down, and I see that it’s open. I’m thinking, do I contact Homeland security and risk embarrassing Rudy…“