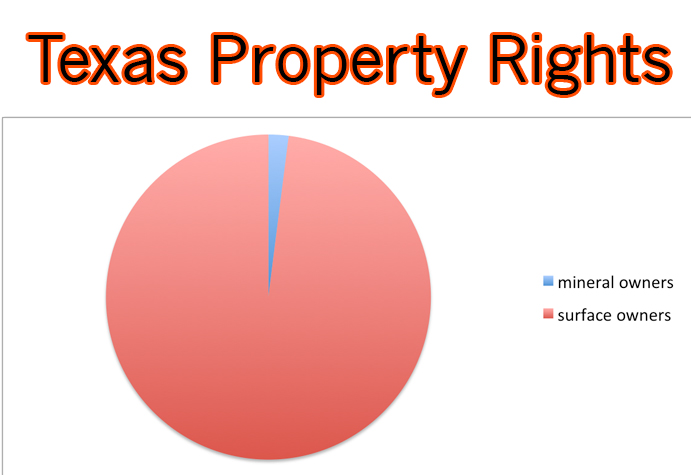 Imagine my surprise to learn that only 2% of Texans own minerals rights.

Tricia Davis who is the president of the Texas Royalty Council wrote an essay supporting HB40, the bill written by former Exxon attorney, Shannon Ratliff, that stripped away a 100 year tradition of concurrent regulation of the oil and gas industry by state and cities. You need to read it all but here is an excerpt:

Carefully constructed policy is also important to protect property rights associated with oil and gas development.  More than 570,000 Texans are mineral owners with a Constitutional right to develop their minerals. Source

Davis is quick to point out that many of the 2% are not wealthy but are regular Texans who depend on their royalties to make ends meet, send children to college and pay for medical bills. In public testimony, I’ve heard her include financing retirement in the benefits of mineral ownership.

Gosh, that sounds a lot like what regular Texans in the 98% do with their private property. A home is normally the largest investment a person makes. Many people make home improvements hoping to sell for a profit so they can use it to make ends meet, send children to college and pay for medical bills and finance retirement.

Catskill Citizens for Safe Energy found that the value of homes near compressor stations decline by as much as 50 percent.

This video shows a compressor station release of methane and volatile organic compounds into the air in a Mansfield, Texas neighborhood. This release caused complaints of health impacts and foul odors.

The mere existence of a signed gas lease can affect the home‘s appraised value and the homeowner‘s ability to obtain a mortgage loan, homeowner‘s insurance, and sell the residence. The cumulative effect of unconventional gas drilling on residences in the thirty to thirty-five states where operations occur, or are planned, poses a potential threat to the nation‘s $6.7 trillion secondary mortgage market, since the secondary mortgage market is supported by an unknown number of mortgages affected by residential fracking.

Tim and Christine Ruggiero’s home was devalued 75% because a mineral owner decided to develop his minerals 200’ from their backdoor. See page 16.

People who live near oil and gas development have more hospitalizations.

Hospitalizations for heart conditions, neurological illness, and other conditions were higher among people who live near unconventional gas and oil drilling (hydraulic fracturing), according to new research from the University of Pennsylvania and Columbia University published this week in PLOS ONE.

High levels of volatile organic compounds and formaldehyde have been detected a half-mile from the facilities and in one Eagle Ford Shale case the air pollution traveled 20 miles impacting all in its wake.

…high levels of pollutants were detected at distances exceeding legal setback distances from wellheads to homes. Highly elevated levels of formaldehyde, for example, were found up to a half-mile from a wellhead. In Arkansas, seven air samples contained formaldehyde at levels up to 60 times the level known to raise the risk for cancer. “This is a significant public health risk,” said lead author David O. Carpenter, MD, in an accompanying interview, “Cancer has a long latency, so you’re not seeing an elevation in cancer in these communities. But five, 10, 15 years from now, elevation in cancer is almost certain to happen.” Source

In Denton, residents where evacuated in a 1000’ radius during a blowout.

Arlington residents were evacuated in a 650’ radius during a blowout.

When lightning struck a well in a Denton neighborhood, terrified residents self-evacuated.

Then there is the flaming and contaminated water. Most often you don’t learn much about these cases because they are kept secret in non disclosure agreements.

Even if the percentage of Texas mineral owners is higher than 2%, they are still in the vast minority. Something has to give.

Are you going to continue to let them push you around?

UPDATE:  This letter by Tricia Davis appeared in the Star-Telegram

The fracking ban in Denton was not a victory for democracy. It stripped Texans of their constitutionally protected rights to develop energy on their own property.

Any government — be it federal, state, or local — that takes rights away is the very definition of Big Government. Texas lawmakers deserve credit for standing up against that with House Bill 40, which protects taxpayers and property owners from the kind of illegal, costly, activist-driven bans that Denton is still paying for.

Don’t be fooled by their rhetoric on “local control.” Frack Free Denton wants to expand its campaign statewide to tell all Texans what they can and cannot do with their own land.

Cities in Texas haven’t been fooled thus far, and many have actually spoken in favor of HB 40. Speaking for those of us who still cherish individual rights, let’s hope it stays that way.

So now Davis inflates the numbers by saying it’s millions of property owners instead of what she said previously: “570,000 Texans are mineral owners.”

Davis likes to throw out the terms “property rights” and “constitutional,” but constitutional rights apply to all Texans not just an elite 2%. The rhetoric Davis uses comes straight from the playbook used throughout history to convince the majority to make sacrifices that only benefit a minority.

Please recall when this same rhetoric was used to convince regular Texans to vote against an estate tax they would never have to pay by calling it a death tax.

The wealthiest 2% of Americans tried to convince regular, hard working Americans that their assets would be taxed after death. The estate tax only applied to estates valued at over $1million dollars. In other words, Paris Hilton and her ilk, don’t what to pay taxes on the millions or billions they inherit. That’s free money that they did not work to earn. Of course they are entitled to their inheritance but it is income that should be taxed like any income.

All Texans have the right to enjoy their private property. Private property owners should not be considered squatters by the 2% mineral owners. Constitutional property rights extend to all Texans.

Mineral owners do not have the right to destroy surface owner’s private property subjecting their families to health and safety risks. These are not family values! 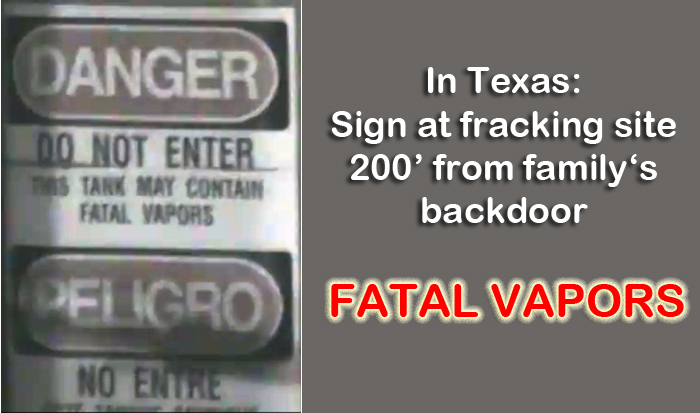 Help me think of other examples where the minority used rhetoric to convince the majority to act against their best interest.