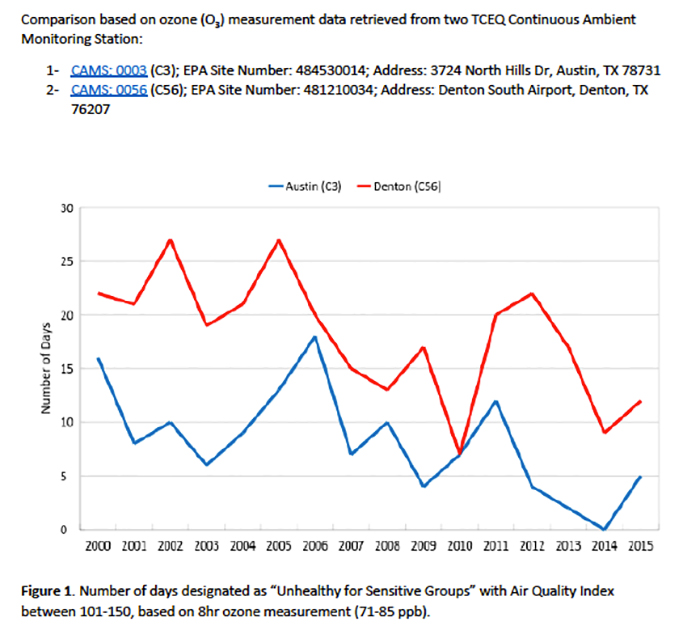 Residents of Denton have requested a systematic evaluation of air impacts from the proposed natural gas power plant(s). Why is the city refusing to grant residents this request?

Below are graphs compiled from TCEQ air monitoring station data by Mahdi Ahmadi. These graphs compare current and past air quality realities in Austin and Denton. Even if Austin’s decision to invest in gas power plant is justified, it is not that straightforward to copy them here in Denton. Here is the simple reason: air quality in Denton has been much worse than in Austin, despite Denton being a much smaller city with significantly less traffic.

Air quality based on ozone is much worse in Denton. A comparison of volatile organic compound VOC data should also be made.

Denton vs Austin on ozone

On December 15, 2015, the Denton City Council had a public hearing on DME’s “Renewable Denton” plan. Only two people spoke in favor of the natural gas power plants.

Mahdi Ahmadi spoke at 7:26. Here is a loose transcript of his comments with some direct quotes in parenthesis. I urge you to listen to his entire presentation, which is only about 5 minutes with questions.

What would happen if they reduced emissions at 3 major sources:

Denton ozone is due to an “unfortunate combination of geography, weather, and new sources such as fracking, population and traffic.”

“What you might not know is how hard it is to get it down. It’s almost impossible and especially and particularly for Denton to lower down ozone and to comply with the national standard.”

“I’m just giving you an example of how hard it is.”

“One of the scenarios included:

What we got in Denton was 1 ppb ozone reduction. That was the only thing we got.”

“Divesting in Gibbons Creek is not going to reduce pollution. It’s going to give the control over that part of the pollution to someone else who doesn’t live here in Denton. Because they are not going to shut it down.”

“What I suggest is: Do not install a new major source of NOx or VOCs in Denton.”

Kevin Roden brings hypothetical case where all cities were going to 70% like Denton. Would that help Denton’s air?

“Yes, but not as much as you expect because …”

Speaking directly to Kevin Roden: “What you can do is to protect the citizens of Denton by not introducing new sources of emissions.”

The presentation that Ahmadi was not able to show council that night is below. Note recommendations on last three slides