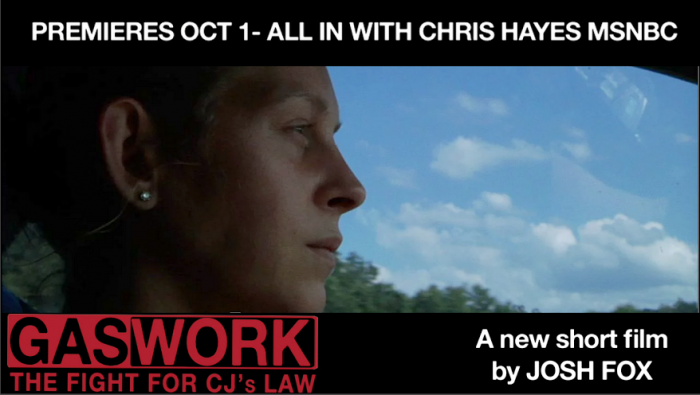 SAVE THE DATE: October 1, 2015
GASWORK premiere on MSNBC’s All In with Chris Hayes
Sign up to host a house party screening

I watched a sneak preview of GASWORK and it’s a truly great and moving film.

GASWORK, The Fight for C.J.’s Law is a powerful new short by filmmaker Josh Fox that investigates the dangerous working conditions in the oil and gas fields.

When we hear politicians and gas companies extoll the virtues of fracking, jobs created by drilling is usually high on their list of talking points. But the jobs created by fracking are not the kind of quality jobs American workers deserve.

They are extremely dangerous, exposing workers to chemicals whose long-term impacts on human health are yet unknown. In fact, the fatality rate of oil field jobs is seven times greater than the national average.

In GASWORK, The Fight for C.J.’s Law, Josh Fox conducts an investigation into worker safety and chemical risk and has interviewed many workers who have been asked to clean drill sites, transport radioactive and carcinogenic chemicals, steam clean the inside of condensate tanks which contain harmful VOC’s, PAH’s and other chemicals and have been told to do so with no safety equipment.

TRAILER FOR GASWORK THE FIGHT FOR CJ’s Law A NEW SHORT FILM BY JOSH FOX from JFOX on Vimeo.

Educate and organize your community – host a watch party of GASWORK

GASWORK will premiere on All In with Chris Hayes on MSNBC October 1st and as we’ve done with broadcasts of GASLAND and GASLAND Part II we are asking you to a host house party screening.

We know this can be a powerful moment to educate folks on what’s really happening in the oil and gas fields across the country and mobilize people to take action.

Sign up to host a watch party and we’ll be in touch soon with a screening guide and more info on the broadcast.

We’re suggesting your watch party be from 7-9pm, but the film will be available online so if you’re not free to host October 1st you can have your screening on another day. The important thing is to get folks together.

Because we’ve seen the anti-fracking movement grow from just a few folks sitting around kitchen and picnic tables all across the country into one of the most powerful environmental grassroots movements.

Together we can transition our country from running on dangerous fossil fuels that hurt our communities and their own workers to 100% renewable energy.

Host a screening of GASWORK: The Fight for C.J.’s Law

Someone host a screening and please invite me.