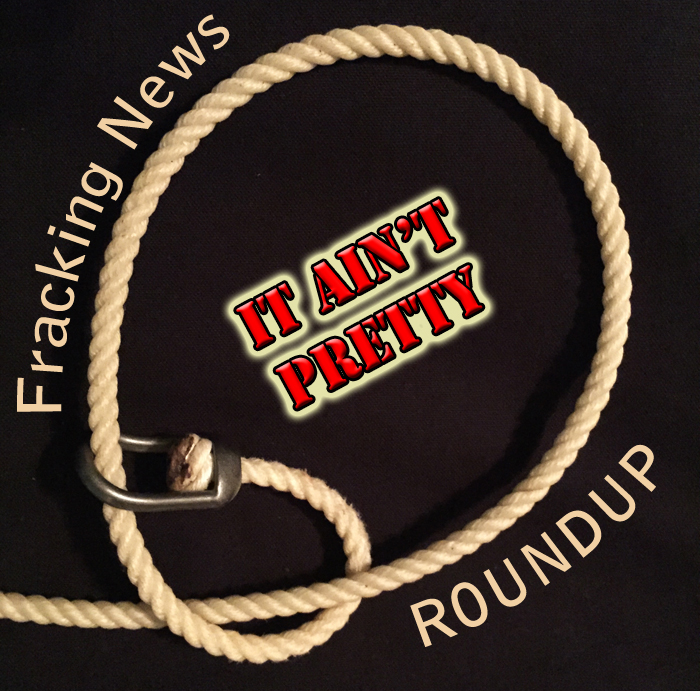 Recent fracking news roundup all in one place.

I can’t stay on top of the news like I did in the past because there is too much and I’m way busy. So sometimes I have gather it up and dump it in all at once. This news ain’t pretty.

When I first started blogging about fracking, the industry would go nuts because I didn’t misspell fracking as fracing or frac’cing like they did. Fracking has a “k” because Lisa Sumi put it there. Now everyone spells it correctly, even the industry. Thanks Lisa.

Therefore: frackquakes. They hate that even more than the “k” but it’s too late to stop it. That’s kind of like the frackquakes fracking causes.

Frackquakes are getting bigger and more frequent.

The largest tremor, logged a “significant earthquake” by the USGS, could be felt as far away as Wichita, Kansas, about 160 miles north, broadcaster KOTV reported. Reuters via Yahoo

The people who live in the area feel terrorized by fracking. One lady said it was like being assaulted. Watch these heartbreaking videos of them talking about what it’s like to live with frackquakes.

The Fracking Industry Has Changed Earthquake Patterns in Northeast BC

Yikes! There have been more than 1000 frackquakes in Northern BC ranging from in magnitude from 1.0 to 4.3. These frackquakes have changed the the flow of groundwater in the region and caused “migration of gases such as methane, radon and carbon dioxide into the atmosphere.” But due to limited monitoring the industry and government lack understanding of how.

U.S. frackquakes are mentioned and how the fracking put sdams at risk.

The U.S. Army Corps of Engineers has expressed a number of concerns with hydraulic fracturing. The agency says industry-triggered earthquakes could crack a dam, and that the transmission of frack fluids through natural faults could erode a dam’s embankment.

Industry-made fractures in rock cannot always be controlled and tend to find the path of least resistance. Since 2010, hydraulic fractures have “communicated” with neighbouring well sites and drilling pads in northern B.C. more than 107 times.

The study found that heavily-fracked counties have

“This is an interesting paper that deals with a serious problem affecting millions of children around the world,” said Dr. Lilian Calderón-Garcidueñas, a researcher who studies air pollution and health effects at the University of Montana in an email.

“These exposures start in utero, so the detrimental effects upon the developing brain are affecting the embryo and the fetus and continue once the child is exposed to the outside environment,” said Calderón-Garcidueñas, who was not involved in the study.

The toxins they measured are the same ones we see associated with fracking.

DeSmogBlog has a great analysis of what’s hidden in the EPA’s fracking water study. I haven’t finished reading it yet because it is dense with great tweetable nuggets like this:

You know how industry is always saying that fracking couldn’t possibly contaminate water because it happens thousands of feet below where our groundwater is? Well, that’s not exactly true, especially in certain states like Texas, where they have shallow frack jobs. Since fractures ofter go astray for 2000′ or more, this is another bad idea from the frackers.

And that’s it for this installment of the Fracking News Roundup.