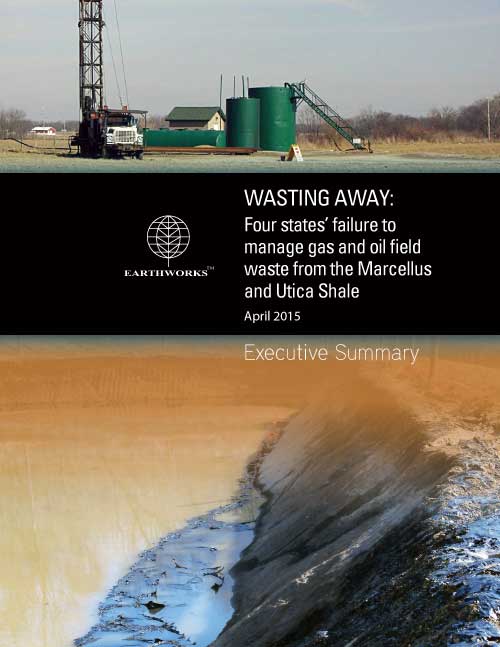 “…our analysis shows that states aren’t keeping track of this waste or disposing of it properly. States must take realistic, concrete steps to better protect the public.” ~Nadia Steinzor, Earthworks.

How much fracking waste is there? The American Petroleum Association says 1.2 barrels of waste is created for each foot drilled. There are around 20,000 wells in the Barnett Shale with a depth of about 8,000′ and a horizontal leg of a mile of more. Where is all that waste going?

Press Release: Washington, D.C., April 2nd — A new report shows that states ignore the risks of sometimes hazardous oil and gas waste despite EPA’s exemption of such waste from federal oversight based on “adequate” state management. Wasting Away: Four states’ failure to manage oil and gas waste in the Marcellus and Utica Shale examines how Pennsylvania, Ohio, West Virginia and New York neither regulate oil and gas development wastes as hazardous, nor can assure the public that they are protected from exposure to hazardous waste.

“Drilling waste harms the environment and health, even though states have a mandate to protect both. Their current ‘see no evil’ approach is part of the reason communities across the country are banning fracking altogether,” said Bruce Baizel, co-author of the report and Earthworks’ Energy Program Director.  “States have a clear path forward: if the waste is dangerous and hazardous, stop pretending it isn’t and treat it and track it like the problem it is.”