Interrupting this alert for… Breaking news: A rare earthquake warning has been issued for central Oklahoma! Fracking injection wells cited as probable cause.

In a joint statement, the agencies said the risk of a damagingearthquake — one larger than magnitude 5.0 — has significantly increased in central Oklahoma.

Geologists don’t know when or where the state’s next big earthquake will strike, nor will they put a number on the increased risk. “We haven’t seen this before in Oklahoma, so we had some concerns about putting a specific number on the chances of it,” Robert Williams, a research geophysicist with the USGS Earthquake Hazards Program in Golden, Colorado, told Live Science. “But we know from other cases around the world that if you have an increasing number of small earthquakes, the chances of a larger one will go up.” [Watch 2500+ Oklahoma Earthquakes Since 2012 (Video)]

Back to the alert…

It’s back to Austin for the first frackquake hearing

Come to the state capitol on May 12 at 1pm

Earthquakes across the country have been directly tied to fracking and fracking wastewater injection. 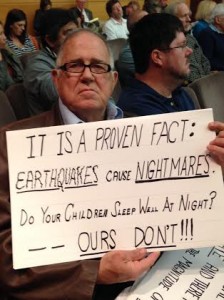 And the frackquakes are happening right here in Texas.

In January, we took a bus load of concerned citizens from the Azle area to Austin to demand action.

We listed our demands and got the attention of national media. A committee was formed to address our concerns.

Now, the Subcommittee on Seismic Activity is having its first hearing.

The committee has decided to hear invited testimony only, but it is important for concerned citizens to be present and make their presence felt.

Demonstrating high levels of interest on this topic is the only way to keep things moving politically and is why so many in the media and government paid attention last time.

The meeting starts at 1pm.

Hope you can make it,

You received this message because you are a member of the EARTHWORKS e-action list.
Donate to EARTHWORKS | Visit your member page | Remove yourself