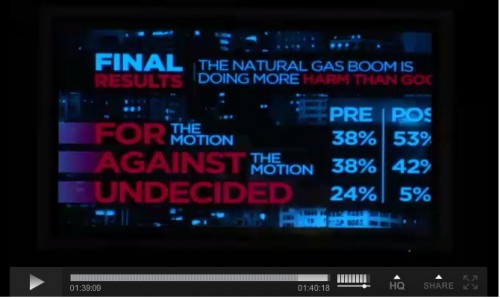 Intelligence Squared sponsored a debate. The motion was No Fracking Way: The Natural Gas Boom is Doing More Harm Than Good. The team arguing for the motion won by presenting the facts and well reasoned arguments and by asking for a common sense slowdown to gather all the science and get rules in place. Before the debate the audience was split but after they voted with the No Fracking Way side.

Watch the debate HERE. You can also vote online but they have the FOR and AGAINST buttons mixed up. Also you will note the results of the debate listed on the website are not consistent with the results calculated and announced during the debate. (Maybe the webmaster got confused.) A screenshot is below.