A federal judge ordered the U.S. Bureau of Land Management to suspend oil and gas leases on 38,000 acres of federal lands in Montana until the government can conduct a review of how oil and gas extraction impacts climate change.

This is one of the most ridiculous things we have heard in some time and would be laughing if it weren’t true.

Didn’t I tell you about that elephant in the room? Oops! Somebody noticed.

In 2008, three radical environmental groups – the Montana Environmental Information Center, the Oil and Gas Accountability Project (OGAP), and the Wild Earth Guardians – sued the government, claiming that the potential impact of climate change – which used to be known as global warming – was not taken into account. The tree-huggers have filed a similar suit which is still pending over 70,000 acres of federal leases in New Mexico.

You might be a radical if you think natural gas–which used to be known as methane–extraction should come before property rights, clean air and safe water.

So, now the BLM has to halt any activity taking place and conduct a climate change study – with no drilling activity on the acreage in question to study in the first place, as was pointed out by the Independent Petroleum Association of the Mountain States. Apparently the environmentalists haven’t figured out that there’s nothing to study until after acreage is leased and activity begins, not before. Furthermore, isn’t skepticism of the concept of climate change growing by the day?

See, we can’t look at all the messes we’ve already made, learn from our mistakes and try to figure out how to Drill-Right. We have to keep making the same mistakes over and over and over.

Is this what this country is coming to? Economic activity will be held up and jobs undoubtedly lost by because of radicals filing lawsuits based on suspect science?

Your money or your life? Is that a hard question for you, Gene.

Remember, OGAP has led the fight to get state legislatures in Colorado and New Mexico to increase regulations that have resulted in a decline in drilling activity in both states. Now this group is targeting the Barnett Shale by providing funding for the activities of anti-drilling activists and is pushing a campaign designed to get Texas lawmakers to follow their Colorado and New Mexico counterparts and enact new legislation which will at the very least seriously curtail Barnett Shale activity. There is no doubt that the Haynesville and Marcellus shales are on their target list, too.

WAHOO! Yeah! Remember that OGAP helped New Mexico pass one of the strongest surface owners protections acts ever! Send your donations HERE! I know a lot of Texas who would sure like to have some protection. (Pssst, we’re not anti-drilling. That’s just rhetoric. I’m a mineral owner but I really don’t want to profit if it hurts other people.)

When does this end? How soon till these radicals get activist federal judges to shut down leasing all across the country under these ridiculous pretenses and Congress to enact laws making such “environmental reviews” the law of the land? 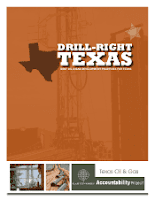 Have you got a problem with drilling right, Gene?