Oil and gas sector emissions in the Dallas-Fort Worth area are significant, but cost-effective solutions are available to reduce the environmental impact and increase revenue for oil and gas producers.

From 2004 to 2007, officials from the Texas Commission on Environmental Quality (TCEQ) worked to develop the latest version of the clean air plan for the Dallas-Fort Worth metropolitan area, with input from other stakeholders including US EPA, local and regional governments, the business community, EDF, and other environmental groups. In May 2007, at the hearing when the TCEQ adopted the clean air plan, testimony was presented which indicated that oil and gas sector sources in the Barnett Shale area around the city of Fort Worth were greatly underestimated in the clean air plan. This testimony cast serious doubt on the accuracy of the photochemical modeling at the core of the state’s plan. Nonetheless, the TCEQ commissioners adopted the plan.

In the state’s May 2007 clean air plan, oil and gas sources in the 9-county DFW metropolitan area were estimated to produce only 26 tons per day (tpd) of smogforming nitrogen oxides and volatile organic emissions.

There is a common misconception that all the natural gas being produced in the Barnett Shale is “clean” gas, with no impact to the environment. While it is true that the use of natural gas for electricity generation results in much lower emissions of sulfur, mercury, and greenhouse gases compared to coal, the production (upstream) and processing and transport (midstream) parts of the natural gas sector can have very large environmental impacts. The official records from the Texas Railroad Commission demonstrate that oil/gas activity in the approximately 20 counties of the Barnett Shale area produces hundreds of thousands of barrels of condensate liquid and crude oil, which are stored in thousands of above-ground tanks that vent to the atmosphere.

Since May 2007, independent efforts were undertaken by both the TCEQ and SMU/EDF to estimate the real magnitude of oil and gas sector emissions. The SMU/EDF effort was lead by me and coordinated by Dr. Ramon Alvarez of the Austin office of EDF.

These updated state results are extremely consistent with the independently produced results of the SMU/EDF study that I released in January 2009. For the 2007 calendar year, I estimated emissions in the 9-county metropolitan area to be 112 tpd on average and I estimated estimates for the entire 19-county Barnett Shale area to be 191 tpd on average. These numbers are within 10-20% of the TCEQ estimates (90 vs 100, 200 vs 191).

In my report I also accounted for the increase in VOC and HAP emissions that occurs on peak summer days because of heating of volatile compounds in storage tanks. I estimated emissions to be 165 tpd in the 9-county metro area and 307 tpd in the entire Barnett Shale area during a hot summer day.

The fact that separate efforts by the TCEQ and SMU/EDF to correct the emissions inventory for oil/gas sector sources in the D-FW area are coming to the same approximate answer is satisfying. Claims earlier this year by some gas company representatives that my estimates were too high by a factor of 5 or more appear to be completely unsupportable.

While it would have been best to have the updated TCEQ data in the emissions inventory and photochemical computer modeling prior to TCEQ adoption of the DFW clean air plan in May 2007, it is clear that in the future, state and federal regulators will have a more accurate picture of the true magnitude of emissions from the oil/gas sector in this part of Texas.

It is unfortunate that the oil and gas sector chose to lobby against common sense measures that were introduced in the Texas Legislature this year that would have both reduced emissions, plus resulted in increased revenue to producers from the capture of excess hydrocarbons that are otherwise being vented to the atmosphere.

Nonetheless, I hope the industry realizes that the days of venting methane and hydrocarbons to the atmosphere are probably numbered. If I was their lobbyist, I would be strongly advising them to take all necessary measures to reduce emissions starting today, to give themselves time, lessen the impact that future initiatives are bound to require, and help protect the environment.
my emissions inventory, references, and additional information can be found at: 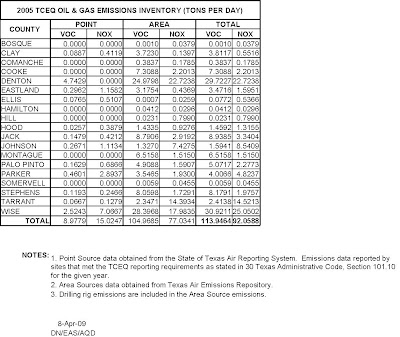