Early this week, The River Reporter disclosed a list of chemicals used in Hydraulic Fracturing.

The Pennsylvania Department of Environmental Protection (DEP) notes that while companies may keep their fracking “formulas” proprietary, the individual ingredients are public record in Pennsylvania. The agency supplied The River Reporter with a list of chemicals that may be used during the fracking process. Any of them may be present in the wastewater generated and may be stored temporarily in open pits at the site.

Researchers at The Endocrine Disruption Exchange analyzed the list “for its potential health effects.”

TEDX staff searched the literature for health effects associated with the 54 chemicals and broke them into 14 different health effect categories commonly used in government toxicological literature. The table below shows the number of chemicals out of the 54 that have effects on at least 10 health categories. 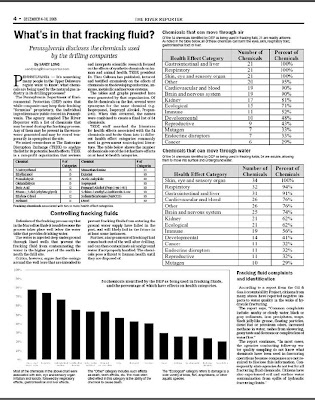 Until yesterday I didn’t know about the radioactive sand that is used as a proppant in frac fluid. Thanks to Steve at Who’sPlayin’ for directing me to this bit of bad news:

Radioactive tracers are the most common method currently used to determine propped fracture geometry, but they present many safety and environmental issues that can have a major impact when using this technology as part of a fracturing treatment. Tracers must be transported, stored, handled, injected, and monitored in accordance with a number of state, federal, and international regulations.

And we were worried about–Barnett Shale Radioactive Waste is Carcinogenic and has a 1,622 Year Half-Life–the radioactive dangers they are bringing up from the deep, dark below. We didn’t know they were adding MORE radioactive material to the mix.

At first glance the “improved” fracturing technology seems to be eliminating the need for the radioactive material but then they mention “tagging material in the resin coating” and “gamma rays” and “a fast neutron source.” The improvement of this “improved” technology is questionable.

Clearly, the industry will do anything to produce the gas and humans are merely collateral damage.