“…oil companies are slated to receive more than $32.9 billion in handouts from taxpayers over the next five years.
~Friends of the Earth
An analysis of $32.9 billion in tax breaks, subsidies and other handouts the oil & gas industry will receive by 2013.

Republicans shoot American taxpayers in the foot and we smile all the while. Republican legislation hands Big Oil record breaking profits subsided by us so they can spend record breaking amounts lobbying against our interest and buying politicians who will repeat the same addictive cycle and keep us stuck and dependent on hydrocarbons.

In 2005, the Republican controlled Congress, at the urging of Dick Cheney, passed the Energy Policy Act of 2005. The EPA05, combined with incentives that were already in place, gives the oil and gas industry $23.2 billion in tax breaks over the next five years. 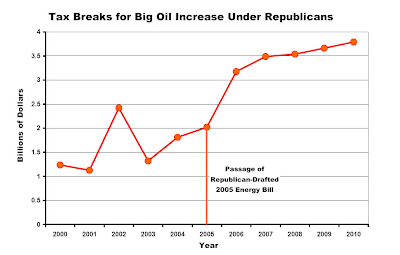 Graph from Friends of the Earth 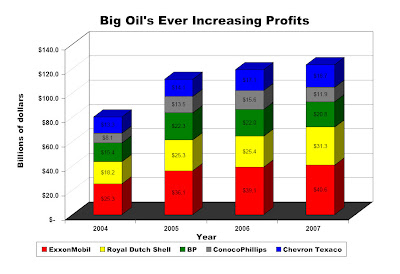 Graph from Friends of the Earth

The figure could dramatically increase over the next 25 years if current tax breaks are extended and if oil companies win a lawsuit seeking to avoid paying up to $53 billion in royalty revenue for offshore drilling. Congress should act immediately to end these giveaways to the oil and gas industry.

Other handouts Big Oil receives from the federal government, in addition to the tax breaks, include: royalty relief, research and development subsidies and accounting gimmicks, bringing the total handouts given to Big Oil to $32.0 billion over the next five years.

As they reapeth so they spendeth.

Under fire for high gas prices, the industry is spending record amounts on influence in Washington. Plus: How it’s playing in the presidential race.

NEW YORK (CNNMoney.com) — As angry voters spark a barrage of energy bills in Congress, the oil industry is spending record amounts of money protecting its interests.

…
But when it comes to lobbying – and spending money that goes toward researching, writing and convincing lawmakers to vote its way – the industry ranks fifth. If the spending continues at the current pace, the industry is set to break last year’s $83 million record.

The amount spent on lobbying by the industry, along with lobbying money in general, has been setting records since 2005.

The oil and gas industry is spending tens of millions to make sure nothing changes. Why would they want a new energy bill when the Energy Policy Act of 2005 is such a SAH-WHEAT deal for them?

The oil industry may have not gotten its drilling wish list just yet, but so far they have been able to avoid higher taxes.

Looking at the dollars spent lobbying Congress, that may not be surprising. The renewable industry and their allies in the environmental movement have spent a combined $19 million lobbying Congress this year – half what the oil industry has spent.

Big Oil lobbying is one reason we can’t move the United States forward and lead on the clean, renewable energy front. The other reason is protection money paid to our elected officials by Big Oil.

If cash equals friendship, then John McCain and the oil industry are best friends.
The Arizona Republican has taken $1.4 million from oil industry employees in the 2007-2008 election cycle, more than any other politician, according to CRP.

That’s over three times as much as Barack Obama, who ranks just below Hillary Clinton as the highest Democrat recipient.

Those numbers are consistent with how employees in the oil sector give overall – nearly three quarters of their money usually goes to Republicans, although they have been leaning a bit more Democratic in the recent election, according to CRP.

Big Oil wants to be sure their employees are paid handsomely so they can contribute generously to their Republican protectors. While you and I were paying $4 per gallon for gas, ExxonMobil made $11.7 billion in profit during the first quarter of this year. Last year ExxonMobil paid Rex W. Tillerson, CEO, $4.3 million.

That translates to a paycheck of more than $11,315 every day, including Christmas, Easter and the 4th of July.

In case you’re wondering what he does with all that money,Tillerson has given $55,000 over the past four years to Republican campaigns. But Tillerson is not the highest paid Big Oil executive by a long shot.

According to Forbes.com, the five highest-paid oil executives are as follows:

No. 5 — Bob R Simpson, XTO Energy, has an annual compensation rate of more than $32 million.

Big Oil’s HUGE Money is also spent to buy media influence and to propagandize us into believing myths that serve their interests and harm ours. Chesapeake Energy admitted in an NPR interview that they pay for media influence, and a recent Texas Observer article called out the Star-Telegram for its conflict of interest due to Barnett Shale royalties. Because of constant propaganda, most Americans believe the lie that methane producing natural gas is a cleaner fuel and ignore the environmental devastation caused by the high impact methods used to produce shale gas.

The recent ruling by the Supreme Court, which is now dominated by ultra conservatives, that punitive damages against Exxon for the Valdez spill cannot be sought because there was no profit in the spill gives Big Oil a license to pollute. Are spills ever profitable? The ultra conservative Supreme Court failed to consider the environmental laws, meant to prevent spills at Valdez Port, broken by Exxon. Ignoring the environmental laws saved Exxon millions and added to their profits. “Exxon is immortal, but Natives die” and, twenty years later, most of the Natives harmed by the spill have already died without collecting compensation for their losses.