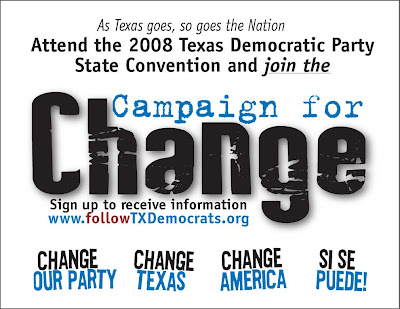 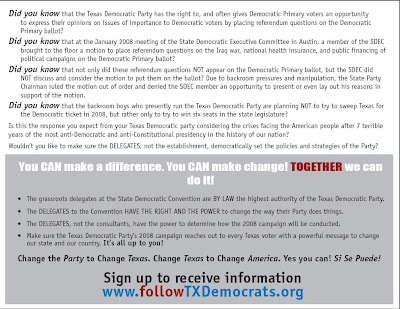 A reform movement to open up, democratize, and empower the Texas Democratic Party through the majority vote actions of the Delegates at the State Convention in June is taking shape.

The objective of the Campaign for Change is to change Texas, and thus change America, by transforming the Texas Democratic Party into a more open, democratic, empowering organization that is governed openly and democratically by the grassroots, instead of by insider cliques that would rather collaborate with robber barons and Constitution thieves than lose their control over the Democratic Party.

The Campaign for Change believes that transforming the Texas Democratic Party into a more open, democratically governed party will broaden the party’s base by putting up a welcome sign for disaffected Democrats who have disengaged from the political process, Independents who want real change, and disgusted Republicans who have been driven away by the anti-Constitution criminals who hijacked their party.

The Campaign for Change believes such a transformed Texas Democratic Party will broaden the party’s base and campaign to sweep the state in November 2008 for the benefit of all Texans, rather than settle for the kind of defeatist campaign to win only a few seats in the state legislature that the insider clique conducted in 2004 and 2006, and which the insider clique is planning right now to do again in 2008 unless the grassroots Democrats assembled at the State Convention take charge of their party.

To campaign to carry the state is not a mere political issue; it is a moral issue. A Democratic Party that is worthy of the legacy of its forebears will fight to win elections not just to put points on a political scoreboard, but to restore level playing fields and the fruits of Constitutional democracy for all working, middle class, and agrarian Texans.

To limit the state party’s campaign to winning a few legislative seats, as it did in 2006 and 2004, is just playing politics; it is not fighting for the people. If the Democratic Party in Texas ever hopes to regain majority status, it must earn the trust of the people by fighting for the people in every corner of Texas – not just to sweeten a few political careers, but to stand tall on behalf of working, middle class, and agrarian Texans in order to win them relief from special-interest corporate government and from criminals who trample on the Constitution to fatten their own coffers.

The Campaign for Change believes that the first step in restoration of the Texas Democratic Party to a real party that fights for the people of this great and beautiful state is to restore to the people an open, democratically governed Democratic Party that welcomes every person who wishes to participate in self-government of the people’s political party as the access point to self-government in the society at large. The first occasion to make this happen is the Texas State Democratic Convention in June 2008.

As a volunteer for the Campaign for Change, I am helping to get fliers about the Campaign distributed at Democratic County and Senate District Conventions on March 29.