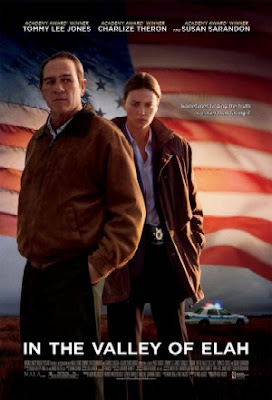 In the Valley of Elah.

Why would they let a little boy fight a giant?

In the Valley of Elah is based on the case of Specialist Richard R. Davis, who, after returning from Iraq, was found dead of multiple stab wounds four summers ago. In the film, all the clues that Hank uncovers — a midnight meal at the local chicken joint, the possible involvement of drugs — carry the fascinating banal sting of true crime. The film was shot by the great cinematographer Roger Deakins, and he gives it a high-bureaucratic ’70s classicism — the grip of stately fluorescence. The power of In the Valley of Elah is that Hank, in trying to learn how Mike was killed, is really delving, step by step, into the reality of the Iraq battle zone he came from.
EW.com