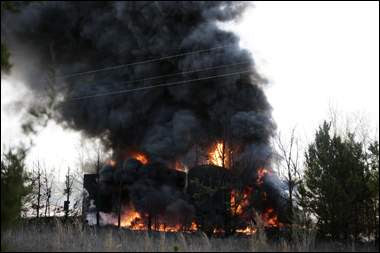 Staff photo by Tom Turner
Oil storage tanks burn during an oil fire after an explosion early this morning. Multiple fire departments are on the scene attempting to contain the blaze.

SLOCUM — Hours after a lightning strike caused an explosion in a battery of oil tanks, firefighters were finally able to bring the inferno under control. The firefighters not only battled the flames, which at times reached more than 70 feet in the air, but muddy conditions, thick, toxic black smoke and faulty equipment.

The following illustrates why it’s so important that these facilities comply with regulations. The injection well near me that was recently shut down did not have levees that met regulations.

“The Texas Railroad Commission just said as soon as we have containment then we can put the foam on it. So let’s get the equipment ready to go and let’s give this thing about another 30 minutes to burn itself down,” he said.

Missildine explained containment, saying the levees around the tanks had to hold not only the oil, but any foam they sprayed and they could not let the combination of liquids breach the levy because of environmental reasons.