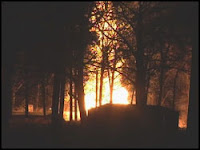 Remember that well that exploded just before Christmas and the nearby residents had to evacuate? Well they can’t seem to get it capped and they expanded the evacuation area.

Attempt to cap gas well fails
Officials are unsure when the work will be completed.

An attempt to cap a natural gas well in Frierson failed today and the fire from the week-old explosion continues to burn.

Officials expected the fire to be out by noon Tuesday, but say things didn’t go as planned. They managed to put the fire out with water, but they had difficulty keeping the natural gas from flowing out of the hole.

Crews eventually had to reignite the well in efforts to get rid of the burning gas, officials said.

The evacuation area around the burning well in DeSoto Parish was expanded to a half-mile radius, and some evacuees were allowed to return to their homes to get some belongings.

Jimi Williams and his wife were among those allowed to make a brief visit home. They checked into a hotel late Monday, and he says they plan to have an extended stay.

“I don’t think that they really know how long it will take,” Williams, 40, said. “I told my wife to be prepared to stay for a while. I didn’t figure we would return home today and I don’t think it will be tomorrow.

“I’m pretty optimistic about things, but with this deal I’m not really sure because the experts are not sure. They wouldn’t answer any of my questions.”

Williams says they’ve been inconvenienced since the well exploded. An underground natural gas blew out and caught fire Dec. 23 as the well as being drilled for Winchester Production.

Initially 15 families were evacuated but when authorities extended the evacuation zone, an addition 10 families were forced to leave their homes.

Extending the zone was part of the original plan for dealing with the well fire. Officials are unsure when the work will be completed.

I just feel bad about all those wells they’re drilling all over Cowtown.