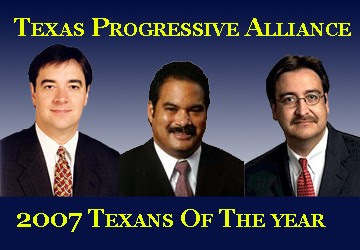 The Texas Progressive Alliance is proud to announce the House Leadership team of State Rep. Jim Dunnam, State Rep. Garnet Coleman, and State Rep. Pete Gallego as our 2007 recipients of the Texan of the Year award.

There may not be another three individuals who have done more for Democrats in the state of Texas over the past four years than Rep. Jim Dunnam, Rep. Pete Gallego. Together, they have led the fight for the resurgence of the Texas Democratic Party. Every day is another story. They fought through the 2006 elections, and then they fought for the months leading up to the first day of session. They led the fight against Speaker Craddick in the final days of the session, and are now poised to add to the Democratic gains in the House as they continue their roles as Co-Chairs of the House Democratic Campaign Committee.

Their work together is imperative to the continued progress of Democrats in Texas, but it’s their individual efforts that really demonstrate how this leadership team makes the best of one another for the good of all Texans. Here is a brief highlight of what each of these leaders did over the past year:

In 2003, we had a mere 62 members in the House in 2003. Today, there are 70, including State Rep. Kirk England who announced his intentions to switch parties and run as a Democrat next cycle. In only 5 years, there was full frontal attack on Speaker Craddick’s ability to lead, launched by one question by the Waco Democrat: “Mr. Speaker, what is the process of removing the Speaker of the Texas House?” His mastery of the House rules is incredible to watch.

During the 80th Regular Session, Rep. Jim Dunnam led efforts to clean up the mess Governor Perry and the Republican leadership made at the Texas Youth Commission. He worked with Rep. Coleman and Rep. Gallego to lead the fight against expanding new tax cuts for the richest 10% of Texans at the expense of health care and education opportunities for Texas families. He passed numerous bills for his district, but he will forever be remembered for the efforts he made on the House floor, challenging the absolute power of Speaker Craddick.

Rep. Garnet Coleman is one of the most progressive members of the Texas House. Rep. Coleman filed over sixty piece of legislation, including (1) legislation end tuition deregulation, (2) legislation to overturn the ban on gay marriage, (3) legislation to prevent the construction of any new toll roads anywhere in the state of Texas. But beyond these strong policy positions, he successfully passed legislation to expand health care opportunities for former foster children and double the funding for cancer research. He continued his fight to fully restore CHIP — an effort he’s worked for ever since Speaker Craddick and his allies cut hundreds of thousands of kids off of health care since 2003.

Beyond his legislative work, Rep. Coleman is the top fundraiser for Texas Democrats, and is well-known for his non-stop efforts in supporting House Democrats across the state. He chairs the Legislative Study Group, which received a Silver Star award from the TPA for its incredible policy work.

His policy issues are far-reaching, and can range from helping protect our state’s natural resources to preventing those horrid voter ID bills behind the scenes. Rep. Gallego also helped temper some of the more controversial issues of the session, including immigration and security.

Rep. Gallego often makes waves quietly inside the Capitol, but his efforts help thousands of Texans from all walks of life. Together, Rep. Gallego, Rep. Dunnam, and Rep. Coleman are extremely deserving for our 2007 Texan of the Year award.