The Texas Democratic Party issued a press release in response to Bush coming to Texas to fundraise for Cornyn:

“John Cornyn may think that working for President Bush, instead of the people of Texas, will be beneficial to his campaign. But come election day, the Texans he turned his back on will make certain that he no longer works for President Bush or the U.S. Senate,” said Texas Democratic Party Chairman Boyd Richie.

First, a few days ago Rick receive the endorsement from Democracy for America. 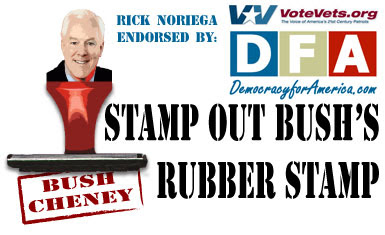 President Bush is fundraising in Texas today for his fellow Texan and diehard Roadblock Republican, John Cornyn. And just a couple of weeks ago, I met John Cornyn’s Democratic opponent, Rick Noriega. Rick’s a fine man, and he’s a veteran of the war in Afghanistan.

Four-star General Wes Clark sent out a press release with his endorsement for Rick.

“At a time when we are facing increasingly serious foreign policy and national security challenges, while needing to repair this Administration’s assault on the Constitution, Lieutenant Colonel Noriega’s leadership and knowledge will be of paramount importance,” Clark said. “I am excited that Rick Noriega has, once again, answered the call to serve.”

The Republican Party tried to take a swing at Rick in an email but they missed. Matt hit a home run with his response.

YOU CAN HELP STAMP OUT THE RUBBER STAMP1
MAKE A CONTRIBUTION