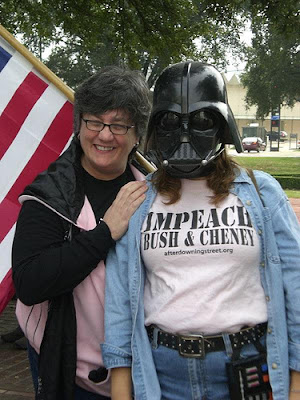 My friend Leslie attended a protest at Hyatt Regency in Dallas where Cheney spoke at the World Affairs Council. Her narration of the protest is posted at AfterDowningStreet.org.

They weren’t letting people with signs in the front of the hotel, but I went in through an underground tunnel & took an elevator up to the middle of the hotel where people were in line, registering to go in. I was just walking around in my “Arrest Cheney First” t-shirt, holding my big, hot-pink-trimmed sign that said, “DON’T IRAQ IRAN!” at my side, until they asked me to leave for just having it…at which point, I started flailing my sign up in the air, and was then “escorted” (flailing all the way through the packed lobby) to the main entrance by three hotel security guys. They got me out the door & I kept waving my sign. The rest of our group was across the street & saw the sign waving and started a raucous chorus of “Don’t Iraq Iran! Don’t Iraq Iran!” that went on for quite a while before I was kicked out of there, too. I stalled a little more on the way, until a police officer insisted I leave. I did put a parting bug in her ear about how “free speech zones aren’t really free…are they?”

Dallas Morning News has a great video HERE. Leslie is the one holding the sign, Don’t Iraq Iran, wearing the dark glasses and an Arrest Cheney First t-shirt. 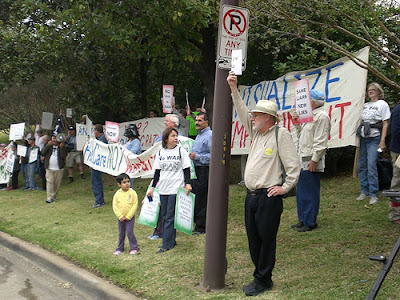 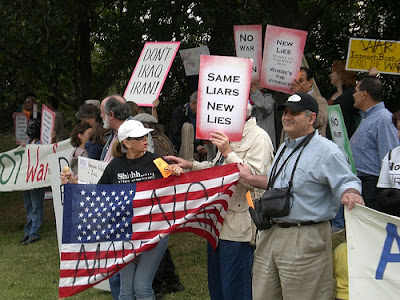 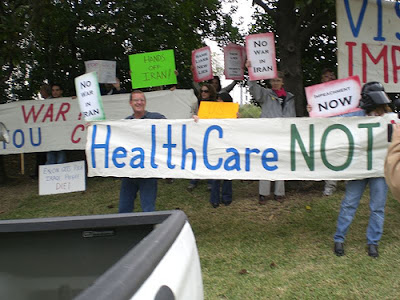 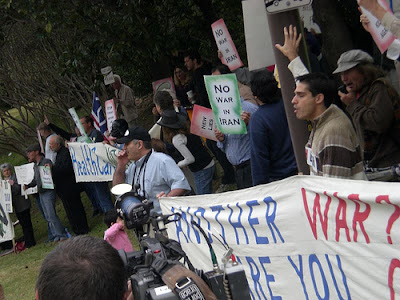