Brains and Eggs has the best coverage of the CPS Energy supervisor who displayed the hangman’s noose in his cubicle. David Van Os is the attorney representing IBEW (International Brotherhood of Electrical Workers) and, as reported on B&E he is considering litigation on several fronts. Van Os said:

“The situation is intolerable and we intend to do everything possible to clean it up.”

The CPS hangman’s noose comes on the heels of the Jena, Louisiana case that has drawn national attention. At a high school in Jena, under a huge tree that served as a gathering place for whites only, a group of white students displayed a hangman’s noose in answer to a black student who wanted to join them under the shade tree. The school administrators chose to ignore the increasing racial tension because they had a winning football team. Eventually, violence erupted and students got hurt but punishment was not administered fairly. Only the black students were punished and that punishment resulted in outrageous prison sentences. Public outcry is strong as it should be. You can help support the Jena Six. See: Jena Six report by Democracy Now. 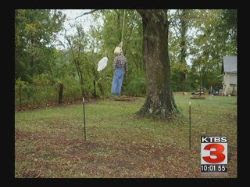 The latest hangman’s noose incident happened in DeBarry, Texas where someone hung an effigy a few hundred yards from the small African-American church where Rev. David Hudson is minister. Rev. Hudson still fights the environmental injustice inflicted on his community by a failed Basic Energy injection well that poisoned their water and rendered it unusable.

The image is from KTBS, Channel 3 News

Below is a letter from Rev. Hudson that expresses his outrage over the lack of response by governmental agencies that are charged with protecting citizens.

Tell me that the effigy and symbolism in the enclosed News report is not the posture of the EPA, TCEQ and Texas Railroad Commission with respect to people of color in Panola County in regards to clean air, clean drinking water and a safe environment. This manifestation of displayed racism is from the home of one of Basic Energy Employees.

Commissioner Williams you are running to be re-elected to the TRRC tell me this is not something you support, because I noticed that your recent donation report indicates that most of your donations are from oil and gas providers and utility companies. We reported this to the Caddo Parrish Sheriff who supported Governor elect Bobby Jindal of Louisiana and the Sheriff didn’t see anything wrong with the display of racism hanging from a well constructed rope around the neck of the constructed effigy to resemble a poor person of color adjacent to a public road for public viewing.