Senator Cornyn, who voted against the SCHIP bill, has been caught telling some untruths about that very same bills.

CPPP has released a statement regarding Senator Cornyn’s SCHIP claims. We have also posted a letter we sent to Senator Cornyn in August and the Congressional Budget Office (CBO) Table that he is misreading that we discuss in the letter.

Here’s a picture from yesterday’s protest outside Cornyn’s office. 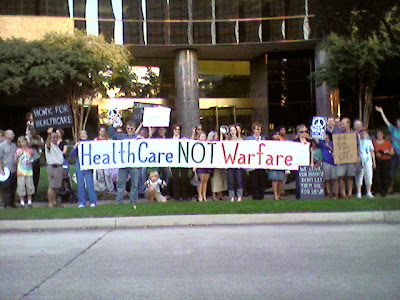 KRLD radio interviewed me yesterday about this SCHIP bill. Below is the research I did in preparation for the interview:

Bottom line: The overwhelming majority of Americans in both parties support this bill.

The veto was political grandstanding by a president who has completely shattered the myth of the fiscally conservative, compassionate Republican Party. It’s his attempt to redeem himself with what’s left of his base and it’s completely out of touch with what the vast majority of Americans want. He is enabled in this by our own out of touch, grandstanding sycophant senator John Cornyn.