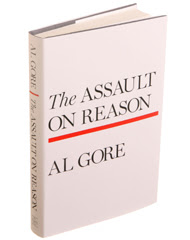 Do you remember the email that was forwarded by your crazy Republican friends and relatives about Al Gore’s electric bills? The one that turned out to be completely false that was sent by a Republican and big business financed, so-called nonpartisan think tank? The one that claimed to have copies of Al Gore’s electric bills but when his electric company was contacted they revealed that they had never been contacted by anyone requesting those bills.

Here we go again: The latest smear is put out by the Media Research Center that is also supposed to be a nonpartisan think tank. Only guess who is paying their bills? ExxonMobil, that’s who!

The Media Research Center is a non-profit 501c3 organization that receives funding from ExxonMobil. MRC is a lynchpin in the right wing machine we hear so much about. Their rants are echoed by outlets ranging from Drudge to FOX NEWS – giving them credibility they clearly do not deserve. From there, all too often, mainstream media picks up on the narratives and suddenly, they are established fact.

Of course, the reason that MRC cares so much about denigrating Mr. Gore has nothing to do with the premise of his book and quite a bit to do with protecting the business interests of its donors. It is a remarkable abuse of the system that while MRC smears Democratic Leader after Democratic Leader, ExxonMobil gets a tax deduction for funding these front-groups for this global-warming-denial campaign of smear and fear against Al Gore and others who are trying to get this country to join the rest of the world to combat the threat from global warming.