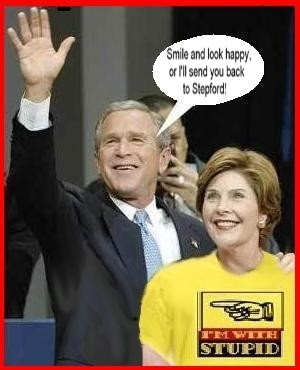 Once upon a time, no one criticized George W. Bush. That was about five years ago, when questioning the president was unpatriotic. Then, gradually, liberals began to voice grievances, then moderate Democrats, then liberal Republicans, then moderate Republicans, and now we’re seeing uber-conservative hammerheads such as Bob Novak and Rich Lowry using the I-words: “inept” and “incompetent.” Foreign heads of state have started to take potshots at Bush when he’s standing right next to them, during photo ops.

It’s as though we’ve reached a tipping point. Any day we’re going to see Laura in an “I’m With Stupid” T-shirt.

You almost feel sorry for the guy, ’cause there’s no indication this is going to get any better. In fact, it’ll probably get worse, and the heat is liable to come from anywhere.

Hold your head high. It is not your fault that you share an astrological sign with the president of the United States, who is, appropriately enough, a malignancy.

It’ll be warm tomorrow in Washington, high in the 60s, with clear skies except maybe over the White House, where, anytime now, with any sort of luck, we’re going to see the wrathful, purifying fire of a justly outraged God. Over to you, Christina, for a look at the traffic.

And Sally and I did not know what to do!

They knocked Sally down, and she fell on her tush.

They attacked our four feet, with stompings and bites.

First they chewed on our lefts, then they trampled our rights!

They found Mother’s money and flushed it away!

If we go to college, NOW how will we pay?

They smashed up our dishes, our toys and our bikes!

Our globe was on fire, and the golf bag Dad likes!

The mess they were making was torture to see,

All men make mistakes. Wise men learn from them, not like the idiot who will keep screwing up until January 20, 2009.

1. Harry Potter and the Worst President Ever — by J.K. Rowling

3. Righteously Puke Your Way to Thinner Thighs: The Bush Haters’ Guide to Dieting

4. Mein Kampf, His Kampf: The Striking Parallels between the Third Reich and the Second Bush Administration — by David McCullough

5. Modern Necromancy: Witchcraft in the Industrial Age, from Rasputin to Cheney

6. Insurgent Passion: The Flames of an Insane War Lick at Her Lust — by Danielle Steele

Dear Heloise: We have an ugly bush in front of our house. We had high hopes when we planted it there six years ago, but it has gone completely out of control and become an embarrassment. All the neighbors are talking about it and wondering why we haven’t removed it. It’s reflecting badly on my whole family. What’s the best way to get rid of this unsightly, horrible thing? — H.C.E., San Antonio, Tex.

Dear H.C.E.: This is a tricky one. Bushes can be really stubborn, and terribly resistant to removal. You need to buy several peach trees and plant them around the bush, creating an imprisonment or impoundment by peach trees. Technically, this is called im-peaching a bush. ARE YOU LISTENING, PEOPLE? DOES HELOISE HAVE TO DRAW A LITTLE CRAYON PICTURE FOR YOU?