I did further research on this story and obtained interviews then re-wrote the story and submitted it for publication to the ePluribus Journal. “Peacemaker of the Year” cleans DC streets

Currently the #1 story on Daily Kos
Diane Baker, who is a 60-year old grandmother from Texas, went to a protest for “Camp Democracy” in Washington D.C. last September to lobby our senators and congress people about defunding the war. She was arrested because she crossed a police line to sit on the steps of a building she helped pay for-a Senate office building. Her sentence was to do community service and, when she returned to Washington D.C. for the protest last week, she served her sentence.

Diane is an ordained minister who works as a hospice chaplain at United Church of Christ in Dallas. She offered to do counseling as her community service punishment. Instead, she was ordered to pick up trash off the streets on a blustery cold day with the temperatures in the 20s. 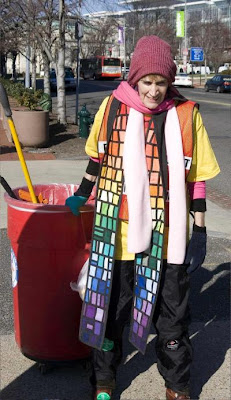 Austin American Statesman
“Baker, a mother of four and grandmother of two, suffers from myoclonic epilepsy, a degenerative muscle condition that causes her voice to quiver and hands to shake. As she signed in to begin her community service, she struggled to write her name.
“

With little effort, I can think 3 ways to better utilize Diane’s skills when assigning her community service:

* Visiting the thousands of wounded soldiers in hospitals

* Serving soup in a soup kitchen

Diane’s real punishment was missing this opportunity as described by my friend and Diane’s fellow protestor, Leslie:

“The peace delegation from Texas all went together that morning for a “visit” with Senator Cornyn, where we expressed our collective opinion that we should have a comprehensive withdrawal from Iraq (not just no more troops ~ no contractors, no permanent bases ~ nada), complete reparations for the Iraqi people, and funding for comprehensive VA benefits (health ~ including screening for PTSD, DU, etc., etc ~ education, housing for the homeless vets, etc.). Afterwards, we all posed for a photo with the senator. Conspicuously missing from the photo was the Reverend Diane Baker, this year’s Dallas Peace Center “Peacemaker of the Year,” because she was out picking up garbage on the streets of Washington DC as punishment for sitting on the steps of a congressional office building.”

Who should be ashamed in this scene–Diane or the D. C. Judicial system?

As Baker slowly dragged her trashcan down the streets of downtown Washington, she acknowledged that she had learned a lesson, albeit one on the “stupidity” of the justice system in “a country built on freedom of speech.”

“They like to use this as a system of shame,” she said, crouching down to pick up a cigarette butt lodged in a crack in the sidewalk. “But I’m not ashamed to be an American.”

UPDATE: I cross posted at ePluribus Media and they may do some of their excellent fact checking, an interview, and further reporting. Thanks y’all!