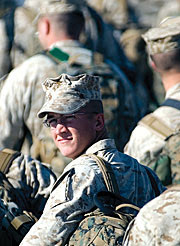 A Marine Goes to War

Lance Corporal Jake Duty turns
for one final look at his family
as his unit heads for Iraq.

with some advice and his best wishes.

And from Joe Duty, Jakes dad:

A father says goodbye to his son

As I watched, through the camera lens, Jake walked to the bus for the beginning of a long journey to Iraq. He looked over his shoulder toward me for one final time.

That’s when it finally hit home – the harsh reality that the third of my four sons was going to war.

Somehow, through all the months he had spent in training, I thought he might not have to go.

As I stood with his mother, girlfriend and her family, we waved as the bus drove by. Then he was gone. It will be seven long months before we see him again.

It’s hard to send your son to do something you don’t believe in, but Jake believes in it and we will fully support him.

I look forward to his return.