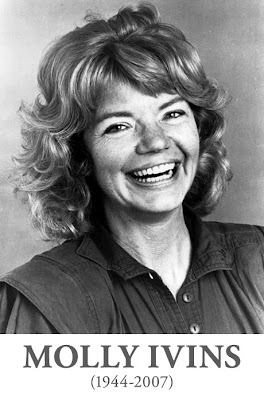 “As for me, it’s time for leaving.” A beautiful tribute in Molly’s own words at Brains and Eggs.

One of Molly’s favorite stories: MotherJones MJ93: The fun’s in the fight

Our Texas freedom-fighters have been prone to misbehavior ever since. A recent Ku Klux Klan rally in Austin produced an eccentric counter- demonstration. When the fifty Klansmen appeared (they were bused in from Waco) in front of the state capitol, they were greeted by five thousand locals who had turned out for a “Moon the Klan” rally. Citizens dropped trou both singly and in groups, occasionally producing a splendid wave effect. It was a swell do.
(snip)

So keep fightin’ for freedom and justice, beloveds, but don’t you forget to have fun doin’ it. Lord, let your laughter ring forth. Be outrageous, ridicule the fraidy-cats, rejoice in all the oddities that freedom can produce. And when you get through kickin’ ass and celebratin’ the sheer joy of a good fight, be sure to tell those who come after how much fun it was.

Thanks to Sonias at Texas Kaos.

A funny account of the event: Moon the Klan

The action fleshed out as the mooners sang a spirited rendition of If You’re Happy and You Know It (Moon the Klan).

After yet another unsuccessful effort to modify the Texas sodomy law, the authors of a successful amendment were slapping backs and high-fiving. A voice from the press box said, “Sergeant, you must go over and reprimand both those men. Because under the amendments just passed by them, it is now illegal for a prick to touch an asshole in this state.”