Did the President Declare “Secret War” Against Syria and Iran?
The Washington Note 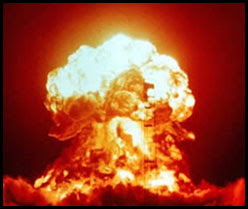 “Washington intelligence, military and foreign policy circles are abuzz today with speculation that the President, yesterday or in recent days, sent a secret Executive Order to the Secretary of Defense and to the Director of the CIA to launch military operations against Syria and Iran.

The President may have started a new secret, informal war against Syria and Iran without the consent of Congress or any broad discussion with the country.”

When questioned today by the Senate Foreign Relations Committee. Secretary of State Condoleezza Rice gave evasive answers regarding Bu$h’s intention to go to war with Syria and Iran. Committee Chairman Joseph Biden ended the exchange by stating for the record that he did not believe that Bu$h had the Constitutional authority to go into Syria and Iran.

Of course the Constitution never stopped this president before. Sigh