...an estimated 400,000 premature deaths nationwide because of pollution every year. 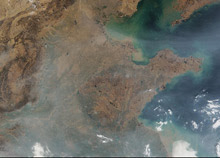 “A GREAT coal rush is under way across China on a scale not seen anywhere since the 19th century.

Its consequences have been detected half a world away in toxic clouds so big that they can seen from space, drifting across the Pacific to California laden with microscopic particles of chemicals that cause cancer and diseases of the heart and lung.”

Rick Perry plans to build 11 coal-fired plants in Texas where we purchase Clean Air Credits from other states so we can cause more pollution.

Across the U.S. there are plans for 150 more coal-fired plants most of which plan on using old technology rather than clean air technology.
Ask Congress to Support Clean Energy