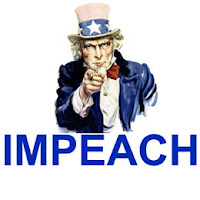 Refocusing the Impeachment Movement on Administration Officials Below the President and Vice-President: Why Not Have A Realistic Debate, with Charges that Could Actually Result in Convictions? by John Dean

Mr. Dean argues that “an impeachment effort to focus on those who have aided and abetted, or directly engaged in, the commission of high crimes and misdemeanors, would have all the positives, and none of the negatives, of going after Bush and Cheney.” His logic is that many of those who “aided and abetted, or directly engaged” in “high crimes and misdemeanors” are young enough that they will likely be part of future Republican Administrations, and will bring with them their “offensive conduct,” thus propagating the culture of corruption. All one has to do is look back to the Nixon and Ford administrations to see what he means. The the first point of “Refocusing the Impeachment Movement” is to disqualify these people from holding “any Office of honor, Trust or Profit under the United States.“
From and analysis of Dean’s article.

Impeach them all! We have grounds and we must Impeach to protect our Constitution.

The Constitutional Grounds for Presidential Impeachment

“This report examines the history, grounds, and proper uses of impeachment. It was written and released by the Judiciary Committee in 1974 in the aftermath of the Watergate crisis, when Congress pursued impeachment proceedings against Richard M. Nixon.”