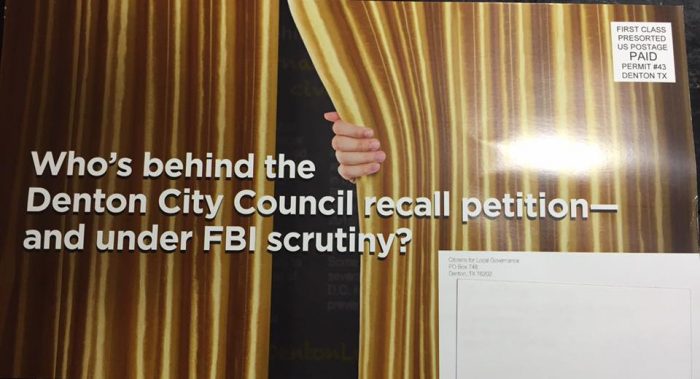 Did you receive a shiny mailer today in your mailbox that includes a link to a website that claims there is FBI scrutiny in Denton and warning of subversives among us who are practicing civil disobedience and even <gasp> campaigning against the death penalty? Then Yee Haw! Its voting time in Denton!

The mailer linked to the Citizens for Local Governance website where they ask:

On one page of their site, they have the Joey Hawkins recall petition.

It seems the local chapter of Rising Tide is the main boogie man. But I’m also mentioned and I’ve move on from the recent election where Denton voted to ban fracking. I’m no longer Putin’s girl. Now the FBI is after me:

Sharon Wilson, a local organizer for EarthWorks, also was contacted by the FBI after posting online details of her arrest in Washington, D.C. in 2011.

Only, guess what: The FBI has never contacted me. Not ever. So, is it libel or slander when it’s in writing, I can never remember.

There are many links on the site because everyone knows links make it all true. Only reading the linked material actually shows their claims are false.

It took the clever Dentonites no time at all to discover who is behind this clumsy Red Scare nonsense. 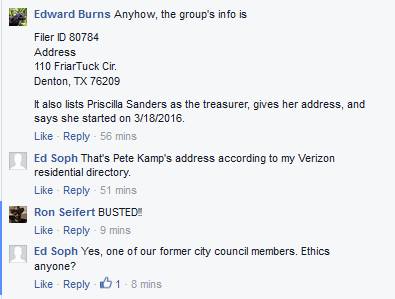 Pete Kamp is a former council member and part of the entrenched, establishment robber barons in Denton. I heard a rumor that she recently started a Political Action Committee and, if so, it’s off to a great start. Only, let me remind you what happened last time there was an election and Denton got mailbox propaganda? 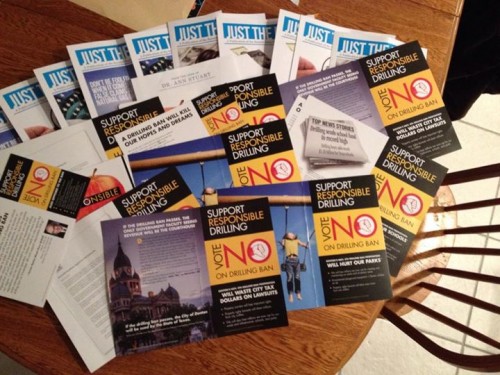 I’ve not weighed in on the Joey Hawkins recall petition. Hawkins is part of the voting block of the four smartest men in the room who want Denton to shut up, sit down and let them make all the decisions because Father Knows Best, by golly. He is not well known for listening to his constituents. It’s not my decision to make, but I thought the recall was a waste of time and effort and had little chance to win.

That’s all changed. Kamp has done Hawkins no favor here.

I don’t believe there is any FBI scrutiny in Denton but there damn sure needs to be.

UPDATE: Please read this article in the Denton Record Chronicle.

Hawkins has received financial help from local real estate agents through their statewide political action committee. He said they have offered to help again.

Brandon Alderete, director of political affairs for the Texas Association of Realtors (TAR), confirmed he is providing the local chapter political advice on the recall campaign. The statewide association endorsed House Bill 40, the state law that nullified the citizens’ initiative to ban fracking in Denton.

You have been warned: Brandon Alderete gives bad advice! The people taking his advice have poor judgment.

Twenty-four hours later, no one has heard a peep from Joey Hawkins. WHERE IS JOEY?

Here is another take on the mailers. I was reluctant to connect the gas plants issue with the mailer but it makes sense because why else would they mention me. I have kept my distance from the whole recall thing.

What the mailers are really about is the establishment panicking because they are loosing power in Denton.

UPDATE 2: This afternoon Joey Hawkins put this statement on his facebook page:

Regarding yesterday’s mailer-
I was aware a Political Action Committee had been formed, in fact the subject of mailers was brought up at the last forum. I don’t have any part in this PAC or what they choose to say. The first time I saw the mailer is when it was posted on Facebook and then received one yesterday in my mailbox.
I am going to continue my campaign and my fight against the petition in the recall effort to remove me from office. I have worked hard on City Council representing District 4 and the City of Denton. I care deeply about this City and I want to continue serving. I ask you to vote NO against the recall.

Astute readers will note that he did not disavow the dirty tactics in the mailer and also note the DRC article linked above showing that Hawkins knew that Austin realtors were giving campaign advice on his behalf. He admits in his statement that he knew there was a PAC.

UPDATE 3: I FOUND THE OUTSIDERS!!! The mailer is focused on outsiders who are trying to influence the Joey Hawkins recall.

But all the people listed in the mailer are:

So I read the DRC article linked in the first update above and went looking for the real outsiders who influence Denton elections and, in this case, the recall. I found Brandon Alderete, director of political affairs for the Texas Association of Realtors (TAR), who admitted he is advising the campaign. Alderete has nicely laid out in a fancy presentation demonstrating how TAR’s “Political Affairs” division in Austin, Texas meddles in the local political affairs of cities.

Here’s what TAR does: 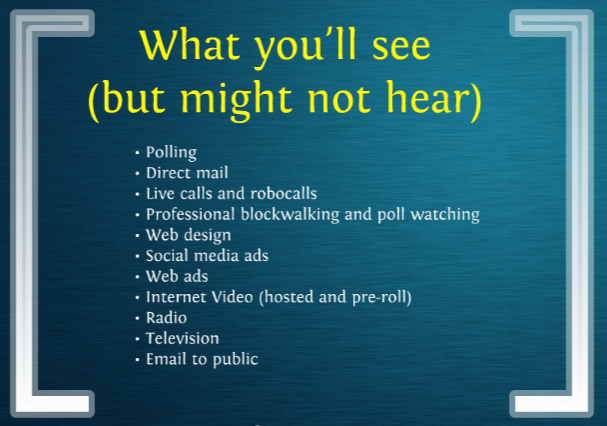 Please view the fancy presentation demonstrating how TAR’s “Political Affairs” division in Austin, Texas meddles in the local political affairs of cities. I think we might expect robocalls and such as part of their influence peddling in Denton politics.

Whew! Now we finally know who the outsiders are behind that ominous curtain. But I think this is a more illustrative picture. 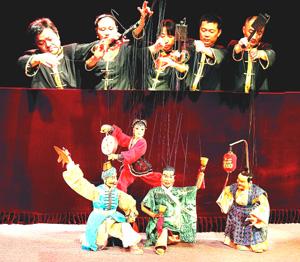 P.S. TAR is or has been an ALEC supporter.

And another thing…  I cannot find Joey Hawkins listed as a licensed–current or expired–real estate agent in the state database or the Denton County database. Can anyone else find him? If he is not a licensed real estate agent or broker, there is only one reason TAR would support him so fiercely: The need him to do their bidding.

UPDATE 5: Forget all this stuff. There is a new threat to Denton: HugGate.

UPDATE 6: Ho boy! The Denton HugGate scandal deepens with another installment: It’s not my PAC or the cheese has slipped off her cracker