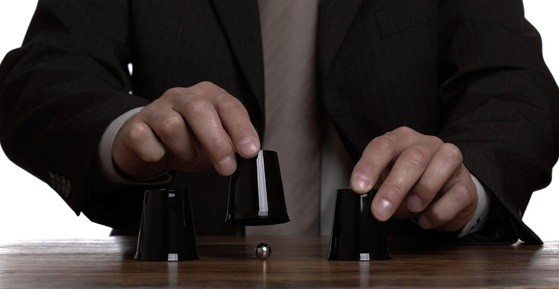 The shell game (also known as Thimblerig, Three shells and a pea, the old army game) is portrayed as a gambling game, but in reality, when a wager for money is made, it is almost always a confidence trick used to perpetrate fraud. Wikipedia

The numbers in the Denton Renewable Energy Plan are about as wiggly as Jello. That’s why many Denton residents are having a hard time following and verifying the numbers. The wiggly-er the numbers get, the more public trust erodes and the more things look like a shell game.

I think we all want what Mayor Watts wants:

But we are not going to get clarity from DME or most of the council members. This is why we need a consultant to analyze the plan and explain what’s really going on and offer more options.

At the November 10, 2015 work session (3:59), Councilwoman Wazny pointed out that the agenda item calls for council to give direction. This was her recommendation for the council:

“We are seven council members who are not engineers. I don’t think we are qualified to study all of this and make a decision that’s going to impact the debt and the future of our city for 20 years.”

This is what happened: 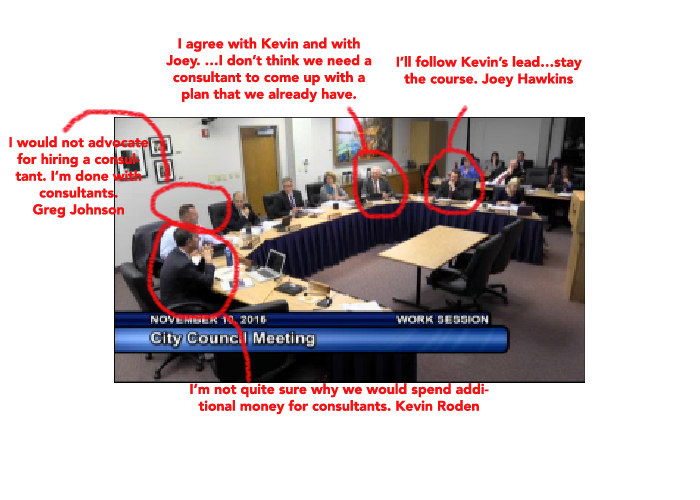 Hawkins: If I’m giving direction, I’ll follow Kevin’s lead…stay the course. I’m very impressed with you guys, all the data that you give us and the emissions and all that.

Dalton: I agree with Kevin and with Joey. …I don’t think we need a consultant to come up with a plan that we already have.

Briggs: Slow it down and wait. There are a few people, several people in this room, who in 20 years will be dead. And a few people making the decision may not live to see us go to 100% renewabls. But we need to think about that. I mean… this decision is going to effect a lot of people and I’ve had a lot of people approach me and not one person is excited about a gas plant for many different reasons.

Imagine the disgust upon learning that DME has budgeted over $30 million dollars for consultants for the Capital Improvement Plan (CIP). (See agenda for 12/08/2015,  DME CIP update pg 12 of 17 top right corner.) Check my addition.

There will be some explanation for this. It could be delivered with name-calling and put-downs. I am prepared and will find a way to live with the pain. This looks really bad though and further erodes the public trust.

Which shell is the fracking under?

As you can see, Banks predicts it will take 28 wells to supply the power plants with methane. But, Barnett Shale wells decline rapidly so that number will not remain constant. As wells decline, more wells will need to be drilled and fracked to keep production up.

Also, there is absolutely no guarantee that the plants will only operate 40% of the time. Once the plants are on the ERCOT grid, Denton has no control over when or how much they operate. As Watts mentioned, these are projections.

The next presentation we see from DME contains the following slide:

Of course, people are confused and angry. They want to know which shell the fracking is under in this shell game.

Then we hear that the natural gas plants will use 37% less gas than the current or Business As Usual (BAU) plan.  Note the word “projected.”

To help figure this out, I watched the work session again. Yes, it was painful. Below is a loose transcript with some direct quotes. My comments are in red.

Usually ERCOT has to operate so many large load centers around areas like Dallas.  Operating 220 MW here means there are 220 MW– “MOST LIKELY” – somewhere around Dallas that would be less efficient that would not be running. ERCOT is going to meet the same load (ERCOT’s load is always going to be increasing because no one is stressing conservation. As more people move into the area, the load will increase. So Phil is making a guess or speculating about what might happen and his guess is colored by his paradigm but not by reality.) whether we build these plants or not. If we don’t build these plants that are more efficient that means that somebody else will keep operating some gas unit that’s older and less efficient and emits more.

These plants would not increase gas usage in Texas

These plants would not increase fracking, locally or nation-wide.

End of my red comments.

Denton! You will still get fracked! The fracking is hiding under the same shell with the emissions projections.

In the November 10, 2015, work session mentioned above, the topic of population growth came up. Johnson said there was a great Caribou migration from the east and the west and that our population was expected to double.

In a recent meeting with Denton residents, DME’s Phil admitted that with Toyota and many other businesses moving to Texas there will be an increased demand for energy. When asked if Denton’s generators would run alongside of the old generators (those Bumfuck, TX generators), he agreed they would. He said if there was enough of an energy demand increase that would be necessary. He also stressed that he doesn’t know that gibbons creek is shutting down, they only “think” they are.

This is all so deceptive, manipulative and creepy.

There is a way that we can immediately slow down climate change: How to slow climate change immediately: cut methane emissions. HINT: it does not involve building more methane infrastructure.