Denton has achieved some notoriety as the first town in Texas to ban fracking. In November 2014, a public referendum was held on this issue, with nearly two-thirds of the community voting against the industrial extraction of methane within city limits. Although the Texas Oil and Gas Association denounced this as an “unprecedented” act, based upon “fears that are not justified”, voters in Ohio and California passed similar bans during the same week.

Over the years, there has been ample evidence that the ban was justified. The dangers of methane have long been established, although industrial experts work hard to obscure the facts. For example, in March of 1937, three hundred Texas children were killed in New London. As a massive methane explosion ripped through their school, with the physical shockwave extending sixty kilometers, you might have thought that people would clamor, “Never again!”

As always, the justification for using methane was economic, with school officials convinced that methane would provide cheap energy. The result was a disaster ten times worse than the Hindenburg fire, which occurred a few months later. Unfortunately, those who ignore history are doomed to repeat it, ad nauseam. In recent years, the methane industry has thus renewed their deceptive claim that gas is safe and… cheap.

Fracking is, ultimately, an irrational idea. In order to obtain methane, drills penetrate through groundwater, causing inevitable contamination of the aquifer. Meanwhile, a sludge of toxic chemicals is repeatedly injected into the Earth’s crust, at thousands of sites. Unfortunately, the Environmental Protection Agency has admitted that they can’t predict the environmental ramifications. Indeed, scientists have yet to identify hundreds of the chemicals involved, and the only thing known for certain is that chemicals are appearing in drinking water. 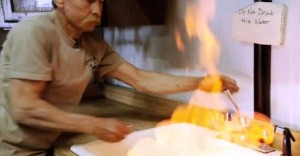 One of the chemicals which appears in groundwater is, unsurprisingly, methane. Although industry experts are paid to scoff at the very idea, it is patently obvious how this occurs. As drills penetrate through the aquifer, they create a hole extending to the methane below. Earthquakes are then artificially generated, shattering the crust and generating additional avenues for methane migration. Afterward, as gas enters the water supply, explosions are inevitable.

In August 2014, shortly before Denton banned fracking, the predictable tragedy occurred. With annoyance, Cody Murray realized that pressurized water was spewing from his well pump. He did not connect this to nearby fracking operations, and entered the pumphouse in an attempt to stop the flood of water. Suddenly, he was engulfed by fire, suffering severe burns which left him permanently disabled. His wife, father, and infant daughter were also injured by the blast. 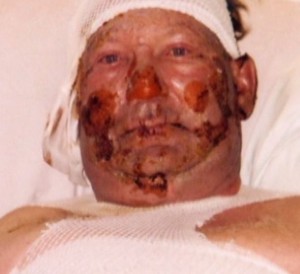 After Denton exercised democracy, in order to stop irresponsible drilling, community leaders vowed to support the people’s decision. Mayor Chris Watts swore that he would stand by the referendum, despite his personal objections, “The democratic process is alive and well in Denton. Hydraulic fracturing, as determined by our citizens, will be prohibited in the Denton city limits. The City Council is committed to defending the ordinance.”

Unfortunately, six months later, the Texas legislature passed an unconstitutional law which prevents communities from regulating the industry. According to this intolerable act, municipalities are powerless to prevent corporations (like Vantage Energy) from operating within neighborhoods. Indeed, the people have more oversight over bakeries and lemonade stands. Predictably, on May 7, a residential methane well exploded in Denton. As firefighters struggled to contain the blaze, flames spread to an adjacent well, which also ignited.

Today, it is as if the referendum of November 2014 had never occurred. Although opportunistic councilman Kevin Roden initially touted the advantages of a fracking ban, urging Denton to “stand up to the energy policies of the 20th century”, he has now reduced himself to a mere tool of the methane industry. Defying common sense, Roden claims that methane energy is good for the environment. Supposedly, industry is going to get it right.

It is not clear how Roden reconciles his many contradictory positions, and it hardly matters. The important thing is that he is now clamoring for the latest gadgetry: ‘quick-start generators’. Roden now insists that Denton can benefit from fracking, by investing a quarter billion dollars in two (2!!!) methane plants. Meanwhile, Denton’s air pollution is already abysmal, vying with Houston for the worst air quality in the state. Do the people of Denton have a right to object? This time, Roden insists that the voters should not be allowed to vote. 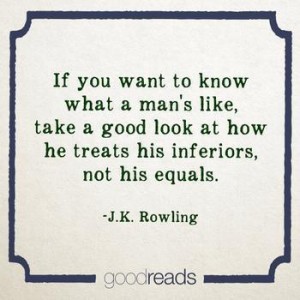