A new “study” of a single, carefully controlled fracking site was released today. It shows that fracking chemicals from that one single, carefully controlled frack site did not contamination any groundwater. Yet. Oh! Oops! A closer read reveals that Begos buried the lead on this story. I’m so surprised that he would do that and that his editors didn’t notice. <insert surprised face>

Seismic monitoring determined one hydraulic fracture traveled 1,800 feet out from the well bore; most traveled just a few hundred feet. That’s significant because some environmental groups have questioned whether the fractures could go all the way to the surface.

The breaking news here is that industry cannot control their fractures as we knew all along and as industry has admitted. The not breaking news is that a single, highly controlled frack job came out okay. I guess this industry statement about fractures: From Schlumberger

…Was more correct than this industry statement about fractures: Tom Price of Chesapeake Energy says:

“These are surgical operations… (ProPublica)

This “study” used tracers to indicate water contamination. Tracers are not a reliable indicator according to many hydrogeologists. The tracers do not always flow through the formations at the same rate as the other fluids. For that reason, you can get false results using tracers. Also note that someone finally monitored a site through the entire process. Isn’t this the first time ever?  I’m pretty sure no one has said that every, single frack job contaminates water. But the fact is that chemicals used in the fracking process have shown up in drinking water. Science needs to either catch up or common since needs to rule. We are dying out here waiting on science to catch up!!! Updated to add tweet of the day: 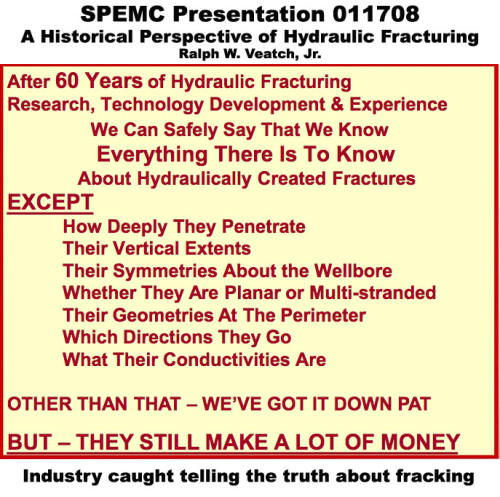