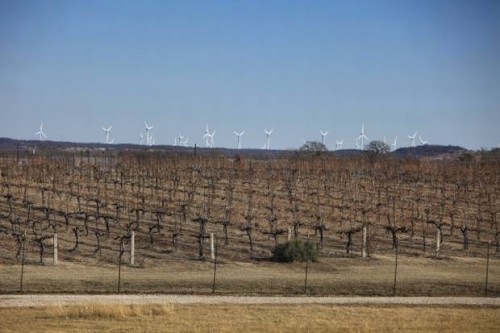 A new study by five researchers, published in the current issue of Energy Economics, found “that for each megawatt of wind capacity,a county gains half a job and just over $11,000 in total personal income.”

The Economic Impact of Wind Energy

The researchers found that for every megawatt of wind power capacity installed, total county personal income increased by $11,150 over the 2000 to 2008 period.

And, for every megawatt of wind energy installed in a county, one half of a job was created.

In some rural counties employment rose 1.4%.

The new wind turbines at UNT are producing more electricity than expected. And they are not emitting any greenhouse gases or toxic emissions, nor have they contaminated any water or land.

UNT has launched a new website to track data about the wind turbines.

Together the turbines have generated 155,003 kilowatts of renewable energy since February, according to the Northern Power website.

They need a year’s worth of data before it will be useful to researchers.

NRDC has more information about wind energy and jobs.

Our research finds that just one typical wind farm of 250-MW creates 1,079 direct jobs over the lifetime of the project. Already 25 projects of similar or greater size have already been built in the U.S., and another 100 wind projects sized from 150-MW to 250-MW are in operation.

I’m pretty sure NRDC doesn’t count the new prostitute jobs or the strippers like the fracking industry does.

UPDATED to address some comments: You can learn more about wind energy from the government site, Wind Powering America. They do yearly studies and you can read the latest one here.

Basically, if we took some of the billions in corporate welfare away from the frackers and gave it to wind and solar, we could make the switch to truly clean energy much faster. Don’t let anyone from Bowie, Connecticut, Arlington, VA blow smoke up your backside.