Williams Production Co. plans to put a disposal well and compressor station in Argyle, in a Denton Creek flood plain which flows into Lake Grapevine. And our regulators seem eager to enable them in the process. It’s hard to believe that Williams would risk losing their expensive equipment, and that our state regulators would allow such a reckless thing to happen?

This photo taken April 27, 2007, shows the typical pattern of flooding across this piece of property. The majority of the land where Williams plans to build a disposal well and compressor station is in this flood plain. 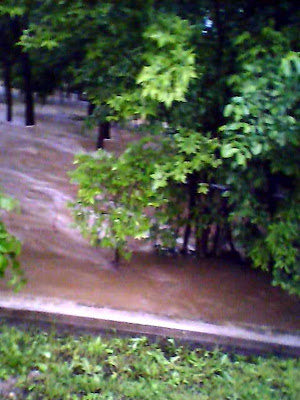 Natural gas compressors and a wastewater disposal well planned for land southeast of Argyle are expected to serve oil and gas production sites, but nearby residents and officials have expressed concern. The area is located in the Denton Creek flood plain that drains into Grapevine Lake.

Officials from nearby communities acknowledge that disposal well leakage could seep into ground water, but the likelihood of such occurrences is uncertain.

Kelly Swan, a spokesman for Williams, tells us not to worry. By the way, Kelly is a man so the quote below should say, “He said…” not, “She said…” Whatever, He said/she said, it’s still not true.

She said the company has never had a pipeline leak.

A former pipeline executive had this to say in an email: Under a FOI request, it was revealed that Williams had about 65 leaks per year for 5 years on a stretch of pipe from the Gulf to NY. They all leak folks!

In Appomattox, a Williams Gas Pipeline ruptured causing 15 injuries, 23 families had to be evacuated and 2 homes were destroyed.

The USDOT is issuing a probable violation and possible civil penalty. They could be fined $952,500. The department’s Pipeline and Hazardous Materials Safety Administration (PHMSA) investigation determined that Williams failed to maintain their pipeline properly.

Who’s on First? At the Argyle Town Hall meeting Thursday, we learned that the proposed waste water pipeline from Flower Mound to the injection site in Argyle will be unregulated. There is no plan for this pipeline, no maintenance plan, no safety plan, no plan to check for leaks and the Texas Railroad representative was scrambling, grasping in air for something to tell the shocked crowd.

If the wastewater line fails, it is too late! You can’t wash water clean. The soil will be ruined. Ask UT about that. Legacy of UT’s oil wealth: a denuded landscape