I almost forgot about the FLIR GasFinder infrared camera demo we had in DISH, TX on Monday. Mayor Tillman, Wilma Subra, Alisa Rich and I were treated to a demo by Craig R. O’Neill, Sr. District Sales Manager – N. Texas, Arkansas, & Oklahoma.  I seriously need one of these magic cameras that makes the invisible visible! A girl’s best friends–a FLIR camera and a Geiger counter.

The pictures below are marked with red arrows where we saw the “black smoke” boiling out into the air. (We were not allowed to keep any of the data from the camera.)

The arrow tail length indicates the level of emissions. (click to enlarge) 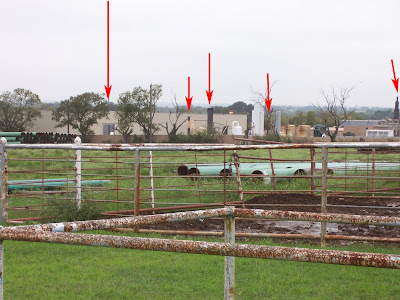 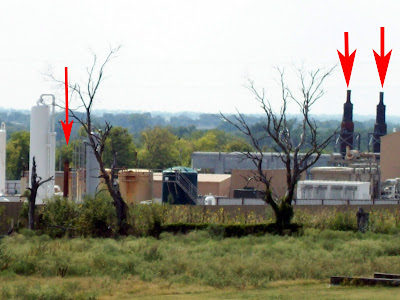 Today, the NY Times has an article about seeing unseen methane leaks with an infrared camera.

By Degrees
Capturing the Benefits of Catching Escaping Methane
…three black plumes of gas gushed through leaks that were otherwise invisible.

And here’s a quote from Dr. Al:

“This for me is an absolute no-brainer, even more so than putting in those compact fluorescent bulbs in your house,” said Al Armendariz, an engineer at Southern Methodist University who studies pollutants from oil and gas fields.

(I got to meet Dr. Al Monday night in DISH.)

This is an important article that describes a serious problem with the “bridge fuel.”

Internationally, the amount of methane escaping from gas and oil operations can be only crudely gauged. But in 2006 the E.P.A. estimated that Russia, the world’s largest gas producer, ranked highest, with 427 billion cubic feet of methane escaping annually, followed by the United States at 346 billion, Ukraine at 225 billion and Mexico at 191 billion.

But the EPA estimates that the figure is much higher:

In its analysis, the E.P.A. concluded that the amount emitted by routine operations at gas wells — not including leaks like those seen near Franklin — is 12 times the agency’s longtime estimate of nine billion cubic feet. In heat-trapping potential, that new estimate equals the carbon dioxide emitted annually by eight million cars.

In case you haven’t seen it watch this video where a FLIR infrared video camera let’s you see what can’t be seen.

ArubaGreed’s YouTube Channel A stunning collection of videos by Tim and Christine Ruggiero, landowners on top of the Barnett Shale.

Dr. Colborn and TCEQ comment on what you see with the TCEQ infrared technology cameras in videos above.