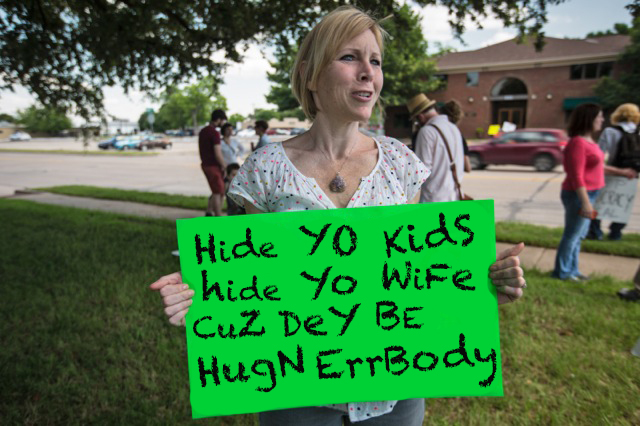 In a secret email sent out to everyone on former City Councilor Pete Kamp’s contact list and widely circulated on Facebook, Kamp carefully lays out the threat of HugGate. She explains that the City of Denton is under a serious threat from serial huggers!

Kamp promises to make a complicated situation simple: there are huggers who are people in Denton and there are non-huggers who are elected to sit on a dais high above the people. A serious problem has occurred because some elected councilors have been seen hugging people! This scandal has been dubbed: HugGate.

In her email, Kamp explains that May 7th, people in Denton will decide whether to re-elect the non-huggers:

Non-hugger Joey Hawkins is on the ballot because his constituents signed a petition for recall:

The huggers running against incumbent non-huggers are:

To make matters worse as you will see in the email, Kamp warns that neighbors who attend City Council Meetings, have been seen sitting next to each other!

Kamp is also in charge of a Political Action Committee PAC focused on keeping the non-huggers in office. Every mailbox in Denton received a glossy mailer from Kamp in which she informs residents that the FBI is looking into HugGate and these neighbors who sit next to each other.

The FBI is specially focused on outsiders who come to Denton and hug insiders. This is called outies hugging inies and puts all navels at risk.

Denton Record Chronicle reported on the mailer but Kamp’s email questions the reporting due to suspicions that the reporter may have hugged someone somewhere at sometime or could possibly hug someone in the future. Said reporter is not suspected of hugging the non-huggers.

For twitter users, the hashtags for this scandal are #huglife, #HugGate and remember to add #Denton. 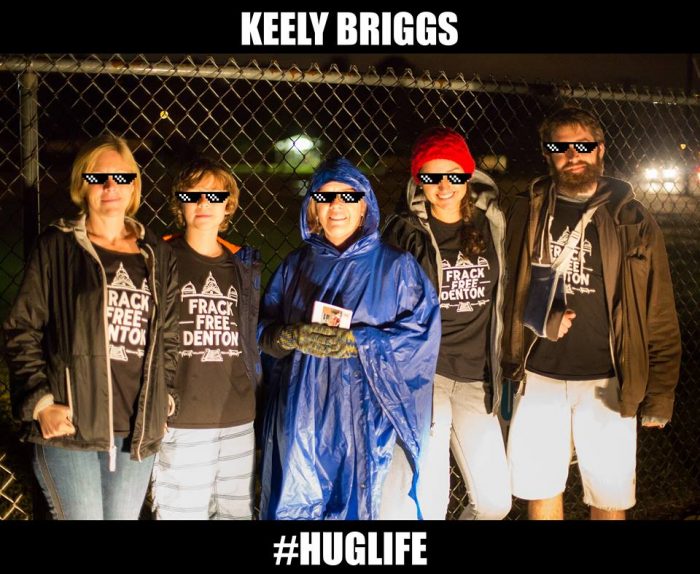 Below is the email in its entirety. Locals are calling this #TMWBR (too much whiskey before rant). Rest assured FBI is taking these matters quite seriously.

I am not an alarmist, but we have a true fight on our hands. There are two VERY different sides to this city council election. We are on the positive, community minded, business/economic growth, service oriented side. We want the best for Denton. We want the best for our families, neighbors, businesses, and schools, and we are going to have to really make some efforts to keep our community great!

I am going to try to keep a complicated situation simple.

Blackland Prairie Rising Tide (information on dentonlocalgoveranace.org website) is the organization behind much of the antagonistic discourse that is happening leading up to the May city elections, but there is much more to the situation.

The following names are ones many of you will recognize as consistently, malignantly negative, or worse…

Bob Clifton, Sam Alexander, David Zoltner, Hatice Salih and her husband, Dan Garza, Elida Tamez and her husband, Theron Palmer, Ken Gold, Deb Armintor, Jennifer Lane … I mention them because they are very much a part of the “other” side of our challenges and because these people appear to have become advisers and close to Kathleen Wazny (Councilmember from District 3) and Keely Briggs (Council member from District Two). Many of us have observed the two councilmembers in close-up communications with members this group, meeting with them, hugging them, etc. We have confirmed out how close they are to these people through an open records request by Jerry Mo. (More for later)! Anyone observing a Council meeting might notice these councilmembers distracted by what shows to be cellphone (texting) use throughout staff and other presentations. Interesting how these two members are the first to profess and demand “transparency,” yet there is not ONE SINGLE text provided by either in this open records request!

Kathleen Wazny is the City Council member from the district dominated by Robson Ranch by voter concentration. There are many good, conscientious people from Robson Ranch, but Councilmember Wazny has been the primary source of information on many topics for that community before she got elected last year. She retains a great deal of influence there due to her role as a key source of local news for them. In fact, she and her husband have only been here a few years. She has demonstrated little interest in Denton’s history, its citizens, or its businesses except as they impact Robson Ranch. She has voted against new businesses, economic incentives that help us compete, and even beautification and cultural projects. She wants to take away our own locally-owned and controlled electric company (DME), which has kept our rates consistently low and made Denton one of the “greenest” cities in the country with unprecedented percentages of wind, solar, methane and other clean electric generation (by our local choice). Robson Ranch residents DO NOT USE electricity from DME, they are served by Co-Serv. When she did not “get her way” during the budget process, she even voted against the City budget!

It has become common knowledge that Councilmember Wazny has hand-picked two candidates to run against her incumbent colleagues:

Simply put, she told her candidates she will deliver Robson Ranch and they will win and she will control four votes (with Keely Briggs) and a majority of our City Council.

Sara Bagheri has been endorsed and given funds by the group Empower Texans. They are outside of Denton big money, and instrumental in the bill that (1) wanted to take way local control and move it to Austin, and (2) allow unfettered fracking inside our city. Regardless of which side of the issue you are on, Bagheri states that she is very much against fracking, but is taking money and support from the very group who is FOR fracking and against cities, schools and counties maintaining local decision-making.

This is a quote from Sara Bagheri (stating why she sought an endorsement) on Facebook:
“I’m an atheist, pro choice, and very socially liberal, so I thought about this direction for a long time. I also talked with them (TFR) about my support of the fracking ban and why I believe HB 40 is unlawful. They still endorsed me, knowing all that.”

We also have pictures of Bagheri sitting next to Will Wooten (leader of Blackland Prairie Tide Rising and a self-proclaimed anarchist) along with many of the people previously mentioned. (e.g. Sam Alexander, Hatice Salih and Dan Garza, David Zoltner, Deb Armintor, Elida Tamiz and Theron Palmer, and also Neil Durrance, Jennifer Lane… Since my technical skills are lacking, I will send the pictures along later.

If you have attended any of the quorums, please share some of Mike Cheves’ comments. He has had some legal problems in the past (DRC, April 19, 2016) but I do not know anything about them. More on Cheves and the other candidates soon.

Another issue – unfortunately I think we have all gotten pretty frustrated with the DRC. Their reporter, Peggy Hinkle-Wolfe has misquoted, written misleading articles, and has constantly tried to legitimize and empower “the other side.” We wish the paper’s leadership would help, but their stated position is that good news does not sell newspapers. We say bad news and bad people do not help our community or keep our local economy prospering!

We MUST stand together!!

Vote for Chris Watts – No opponent, but still very important to vote!
Reject the recall vote of Joey Hawkins

This is not some secret PAC – we are concerned, open, positive citizens who care about our Denton and each other. We care about our schools, businesses, neighborhoods, economic growth, churches, charities, and service to our community.

Please continue to share your thoughts with me and with permission, I will share with everyone else. Comments and suggestions are also appreciated!

I have attempted to make all requested corrections and additions to this email list – let me know if you have any changes to be made.

PLEASE HELP TO GET EVERYONE YOU KNOW TO VOTE!! Early voting starts next Monday, April 25th. Election day is May 7th.

UPDATE: For the latest installment in the Denton HugGate scandal see: It’s not my PAC or the cheese has slipped off her cracker