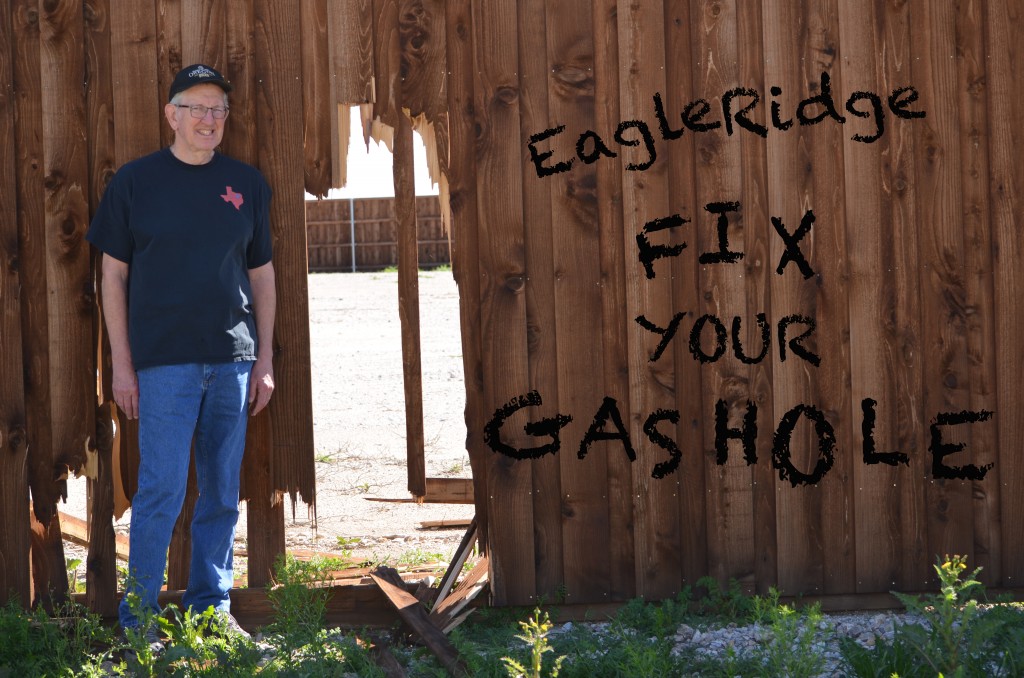 Yesterday, I made a new friend named Ralph at the EagleRidge gashole in Denton, Texas.

UPDATE: They have fixed the fence but not mowed the thistle patch or completed the required landscaping.

Ralph lives in the Meadows of Hickory Creek neighborhood where EagleRidge fracked too close to homes then DR Horton built homes ridiculously close to the EagleRidge frack site. EagleRidge is an all-around, really bad neighbor whose CEO is so chummy with the Department of Homeland Security that he has personal knowledge of who in Denton is on the “watch list.”

There is a huge hole in the fence that surrounds the gas well that is only about 100′ from Ralph’s house. This hole is as tall as a very tall man like Ralph and wide enough to easily walk through. Ralph has stopped several EagleRidge employees and suggested that they get the fence fixed. The employees are not congenial like Ralph and one even drove off while he was still talking.

Ralph has also talked to the City of Denton–the fire department, I think–about the EagleRidge gashole, but has gotten no results.

The main concern Ralph has about the EagleRidge gashole, besides the eye-soreness of it, is that neighborhood children are sneaking through the gashole to play, hidden behind the unholy fence parts, among the gas production equipment. One time Ralph caught the children inside the metal containment barrier that surrounds the tanks.

It is highly dangerous for children to play at oil and gas facilities!!!  There are deadly fumes that have killed grown men on these sites. Also, it’s not unusual for kids to think smoking at a gas well site, hidden from parents’ view, is a good idea, which it is not.

HELLO? Is there someone at the City of Denton who can enforce the part in the ordinance that requires a fence? They should be fined for everyday the gashole remains.

Oh, and, maybe the children are sneaking through the gashole to play on the highly dangerous gas well site because EagleRidge hasn’t landscaped the area around the site like they promised. They haven’t even mowed. and the very thick thistle patch is not an ideal play area. 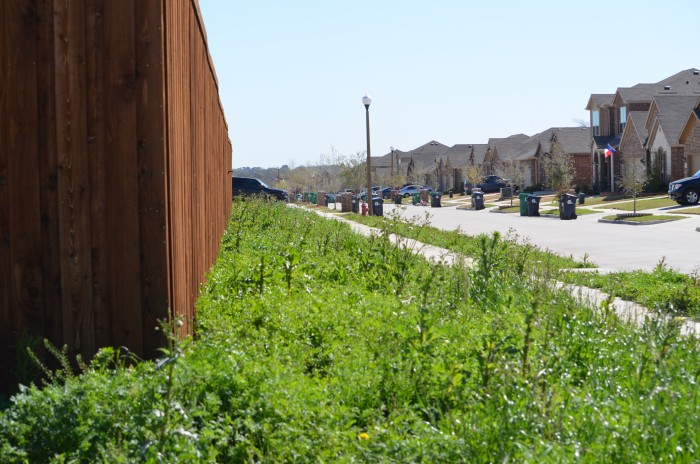 P.S. Thankfully the compressor on the site was not blasting air pollution because it was turned off.