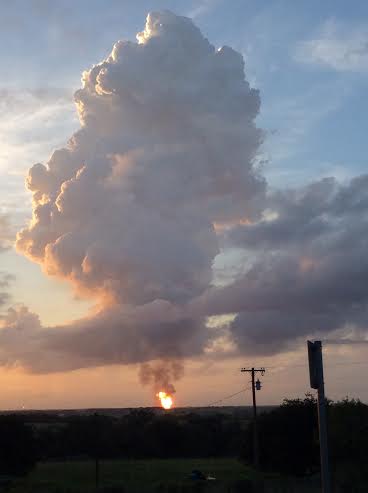 UPDATE: From the Victoria Advocate

Energy Transfer Partners reported to the Texas Commission on Environmental Quality that as much as 165,732 pounds of volatile organic compounds may have burned before the company was able to isolate the line.

Volatile organic compounds can cause irritation of the eyes, nose and throat; headaches; loss of coordination; nausea; and damage to the liver, kidney and central nervous system, according to the Environmental Protection Agency. Many organic compounds are suspected of causing or known to cause cancer in humans.

This pictures was taken by a friend who was driving through the area last night. The photo came with this text:

I saw a huge, tall cloud & pulled off of hwy 183 as I got to the top of a hill and saw the giant fire that was making the smoke cloud so I took this photo ( unfortunately, this photo is unable to convey the scale of it). This was as I was driving north towards Cuero this evening a little after 8 p.m. Oil and gas related, I bet. After sunset, even north of Gonzales, I could see the orange glow from the fire in the distance.

Last night around 8:00 PM I received a text from another person who lives in the area. The text and photo  said it was a Devon pipeline. Today we learn it was an Energy Transfer Partners pipeline. 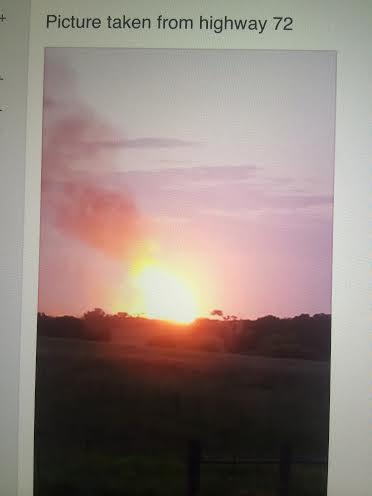 CUERO, Texas — Authorities say no one was injured after a natural gas pipeline rupture sparked a massive fire that prompted home evacuations in South Texas.

UPDATE: Do not forget that industry is not interested in raising the bar on these incidents. They want to lower the bar. From the psyops conference: